The rescue group with which I work, the Lethbridge PAW Society, is bringing out their second annual calendar next month. It features twelve of the cats who were rescued by and later adopted from the group. This year, my oldest cat, my first cat, Tungsten, is featured in a month. Actually, she’s in two places, since the calendar needs to have pictures on the front and back covers and their insides, but each month has a beautiful picture of a PAW cat. I thought I’d show off all the images that were taken of my orange one, ending with the photo chosen for the month of October. The pictures for the calendar were taken by Ms Tanya Plonka, of Puppy Love Pet Photography. As you can see, she did an excellent job; I’d recommend her photography to anyone who wants a permanent record of their special pet. And if you want to purchase a calendar ($10, plus a bit for shipping if you want it mailed), visit the PAW website (www.pawsociety.com). The money goes to the Society, of course.

The first picture I’ll show is Tungsten looking a little melancholy while resting her head on my knees. You can see the dark circles within the irises of her eyes. The veterinary told me some time ago that those come simply with age. You may also detect that her left pupil looks larger than the right. There has always been something wrong with it in that it looks broken or cracked. It has never bothered her, though, so far as anyone can determine. It doesn’t interfere with the pupil’s workings, nor let more light in than should get to her eye. She seems to see just fine. 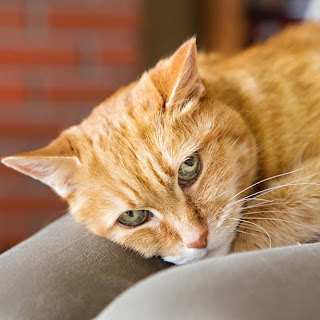 This next shows my tiny one rather kitten-like; I think it’s because the image makes her legs look stubby. 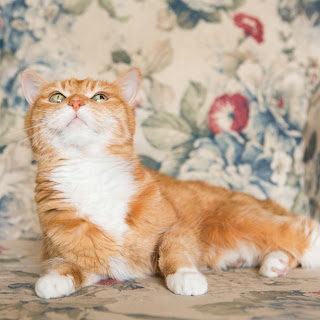 These two were unsuccessful shots of Tungsten, who didn’t cooperate as well as she might have during some of the session. 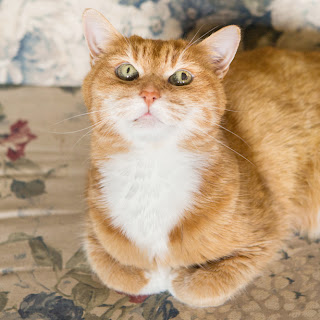 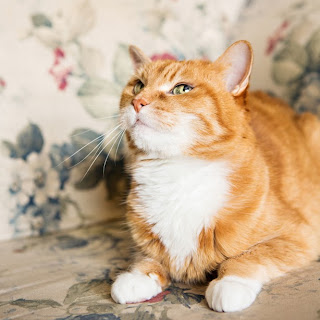 The photo immediately below seems to depict her about to sneeze, but it’s a cute one anyway. This is the photo used elsewhere in the calendar behind an explanation of what the PAW Society does. This next picture wasn’t bad. It’s a typical likeness of Tungsten. 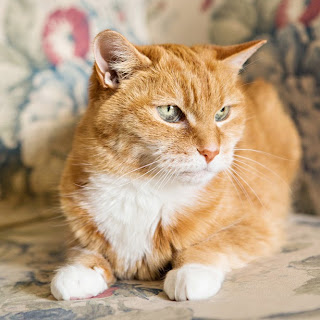 Also typical are the following two. 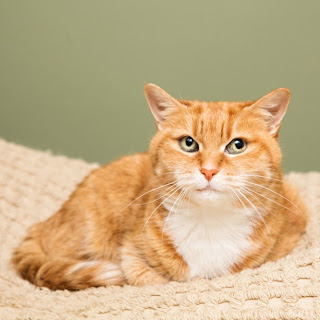 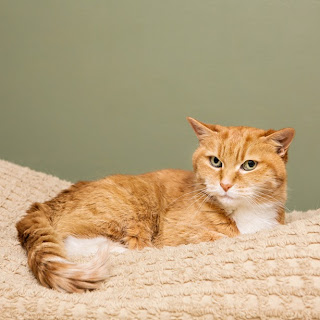 But the photograph that is being used for the calendar proper is this one. As anyone who has a cat (or several) knows, cats do smile, and it does seem to reflect a genuine good mood in the little creatures. Sometimes, I will hold Tungsten in front of a mirror and she can see the two of us together, and she smiles. Other times, she just wants to be put down. Now and then, she has no sense of occasion. Anyway…here she is on the pillows of my bed, where she likes to snooze. She was evidently feeling indulgent when this picture was taken, because she posed well. This is Tungsten, the orange heart of my life. 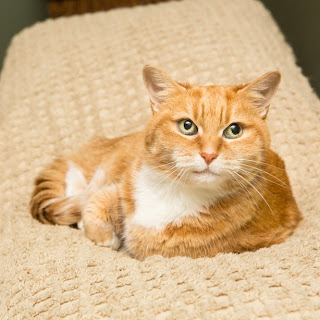