Just a brief article this time to publish how Tungsten is doing in her fight against hyperthyroidism. Her appetite is much closer to what it was a year or two ago, before her condition took hold. She is eating well, but not a great deal and, though I want her to eat more, it is in fact now almost back to normal for her, and is a good sign, really. She looks forward to her soft meals, and eats kibble, so she is not off her food. This is a good sign, too.

The best sign that she is holding her condition’s effects at bay is her weight. She is slowly re-gaining her lost tonnage and the food she eats is doing her tiny body good. She was set on the scales a week ago and she tipped them at just over three kilograms. That’s more than a pound packed on since her most alarming weight of 2.53 kilograms, and just half a pound less than what she was when all this trouble started to take its toll on her. 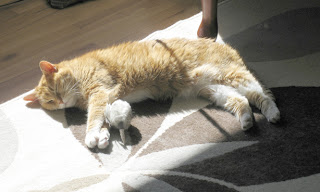 I don’t know if she will ever re-gain her full weight; she is, after all, older now and may not incline to that as she ages, but on the other hand, another half pound is certainly not unrealistic, and I would love to see her that heavy. She needs all the weight she can get. But for now, I am pleased that she has passed the three kilogram mark.

And one other survivor. My ancient micro-wave oven, which I thought had been knocked out by the recent hail- and rainstorm, was not killed. Rather, the socket into which it was plugged was done in, along with another socket. I’ve not heard of such a thing happening; I checked the breakers and everything seems in order. I don’t know if individual sockets can be rendered useless without the breakers indicating it. However, for the moment, a long extension cord will bring the old appliance back into use. That oven will outlive me, I expect. 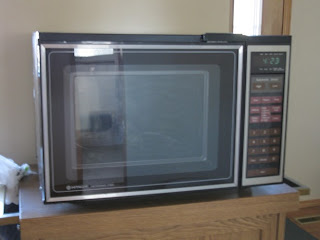