The Changes of Autumn

The weather affects us all. Sometimes, it affects us dramatically; other times, it is more subtle. But it makes changes to our lives nonetheless, and cats are no exception.

Readers may recall my published complaints that Tungsten was waking me at four o’clock every morning to run the tap for her drink of water. Four o’clock wasn’t as bad as five, to which she eventually shifted. I didn’t get to sleep adequately, or often, enough after waking at five o’clock for me to appreciate Tungsten’s thirst. Even so, I rose to slake it.

Then, the weather changed. Here in southern Alberta, it seemed as if autumn came abruptly. This isn’t always the case, but it was this year. Going on three weeks ago now, we had a wet, cold day. Though the days that have followed have not been as cold (even if the nights have produced some frost) or as wet, it was clear that a new season had arrived.

Over night, almost literally, Tungsten’s need for water changed, too. I was pleased to realise the next morning that she hadn’t woken me for a drink. She waited until I got up. This has continued, and may (I hope) until the spring (and thereafter, I also hope). The orange one is sleeping on the bed every night again, which she did not do during the summer, even when the evenings were cool.

And so, to the yellow leaves, the frosty mornings and the crisp, something-in-the-air that tell us autumn has come, I can add Tungsten’s change in drinking times, a more welcome sign than early darkness in the evenings, I think.

Yes, weather affects us all. For instance, for some reason, so far this autumn, I’m not so tired in the mornings... 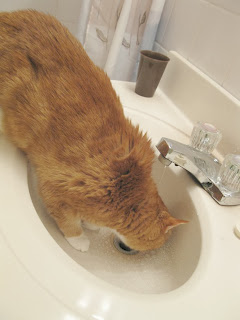