Cammie has come a long way as a foster-cat, and this weekend, she came just a little bit further. She jumped up on my lap, and stayed there.

It began with a bad dream. At least, I think she was suffering some fright in her sleep. She was lying on a dining table chair; she likes the cushion there, and it’s just her size. I was sitting in a neighbouring chair, and heard my foster-cat giving little cries.  I don’t know what she was dreaming about; she came from a home in which she suffered some sort of physical abuse, so her nightmares probably have plenty of fodder from which to feed. I spoke to her and she woke with a start. She immediately jumped on to the table and walked beneath my chin, rubbing her back under my face. It was the first time she had rubbed against any part of me other than my hand. Like Tungsten when the orange one wakes from a bad dream, Cammie was probably glad to find herself in reality again. She returned to her chair after that, but purred louder and longer than I’d heard her before, while I stroked her head. Several times, she looked as if ready to step on to my lap and once even put her forepaws on my legs, only to withdraw them again. 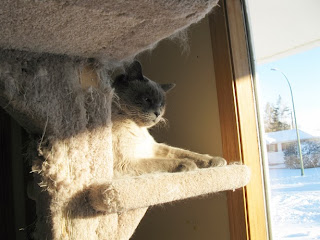 Several hours later, I was again sitting at the dining table, writing. Cammie walked up to me and sat, as if unsure of what to do next. I have been patting my knees when she has been near, attempting to encourage her to jump up. I didn’t think she would. But she did. There was no hesitation, and she began purring right away. Her motor is usually faint, but now I heard it almost as strongly as I do Tucker’s. She lie still for minutes, then got up. I thought she was going to drop to the floor, but she merely changed position. She was on my lap for nearly a third of an hour, purring the whole time. At last, she got down, to have a nibble at the food bowls.

I hope that she’ll repeat her daring leap, but won’t be disappointed if she doesn’t any time soon. She was happy on my lap, and knows that she will be treated well and be given attention and affection. It was something new, and she may have to mull it over a bit. But I think she has crossed a line into greater trust, and she’ll be back. I can’t wait. 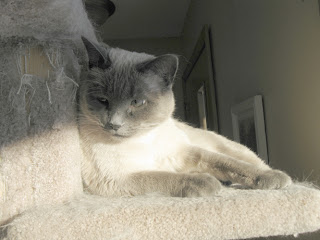