A week ago, we had a blizzard here in southern Alberta. About a foot of snow fell, and it was accompanied by high winds and low temperatures. The following days have been very cold, the thermometer falling to -40° some times. For those of you reading this in other countries, I should write that though Canada has a reputation of being a chilly land, it’s rare to plumb these depths of frigidity. Even -20° (Celsius) is not all that common during winter. I thought of all the people, cats and dogs who don’t have warm shelters at this time of year, and was grateful that mine do. 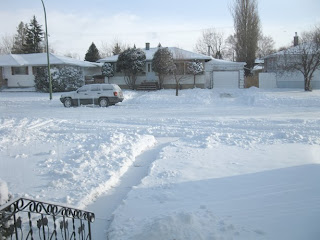 Renn, like all his feline brethren, doesn’t concern himself with possibilities, such as not having a comfortable home. Instead, he restricts himself to facts, and when it snows, my furry scientist begins his studies. There was no snow on the ground when the storm began, but plenty of leaves covered the dull brown grass. These were whipped about by the gale and, with twigs, plastic bags and other debris, created no end of interest for my big boy. 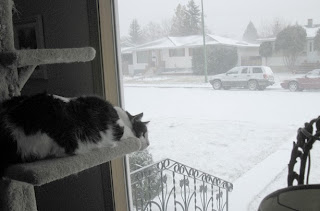 The other cats watched the blizzard progress but without the intensity that a scholar such as Renn brings to an observation. From his perch on the taller of the sitting room cat-trees and, later, at the bedroom window, his attention was riveted by events outside. It was only with the fall of darkness that he relaxed and set aside his studies.

Such weather we have not suffered for years here and, though there were undoubtedly many accidents due to the conditions, I did not hear of any fatalities or even severe injuries, thank goodness. Indubitably, meteorologists and other scientists were keenly taking note of all that happened throughout the day, so as to render such storms less hazardous in the future, but few could have been studying the blizzard with the seriousness of my big boy, Renn.
Posted by John Bellen at 12:19 PM