Tucker had been battling a new attack of urinary infection. For this he had been force-fed a pill thrice a day for a month. That was the prescription. I interpreted it as feeding him a different pill each of the three times a day; giving him the same pill each time would indeed have been an ordeal.

Anyway, semantical pedantry aside, the roly poly one endured his medicine for four weeks. Then he had to give a urine sample. I explained in a previous article about him successfully giving a sample in non-absorbent cat-litter, and how it was contaminated. After two stressful journeys to the animal hospital, Tucker was able to provide a sample directly from his bladder. It has now been proclaimed clean - well, as clean as urine gets. His infection has been destroyed.

I had guessed that this was the case, considering how he was acting, but the confirmation was necessary for my peace of mind and, of course, to plot a new strategy if the infection had not been cured. I am happy for the little sausage of a cat.

Though the affair of getting him to the veterinary hospital and having the sample extracted was very anxious for him, he came home, had a good meal, some relaxation and then play-time. A session of brushing made him feel even better. He was purring minutes after he returned home. He has always been quick to purr, but I think that he is a creature who simply puts bad things behind him. If he sees the cat-carrier, his worries will be renewed, but until then, evil is forgotten. There is a bowl of hard-food for nibbling through the day, soft-food will be served later, there are toys for recreation and comfy places in which to sleep. The house is warm and safe. Life is good. I wish we humans could disregard the possibility of disaster as he does, but it’s the fact that we do not that allows Tucker and those like him to live largely without concern. That’s worth the worrying that I do for him. 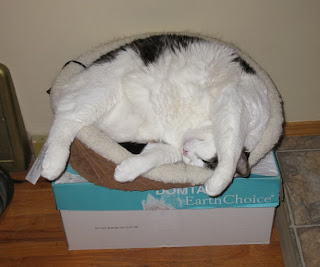