Good News for the BB

At last some good news. The results of the latest tests done on my long foster-cat, Bear-Bear, have come back and they show improvement in his red blood cells. They are regenerating; the implication is that his medicine, prednisone, is working, which means that what he has may not be cancer after all. These are still early days in his improvement, and anything can happen yet, but we are being optimistic. His doctor even mentioned the possibility of reducing the dosage of his medicine. 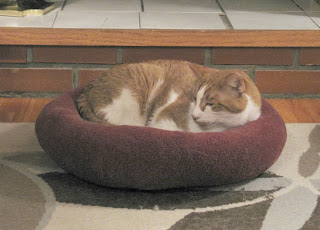 This is good news in itself because the cold that the BB contracted is still hanging on. I had to push the poor fellow off the bed last night because his breathing sounded like molasses being sucked through a straw by a broken engine. There was no chance of falling back to sleep with him there, so I reluctantly told him that he had to go. Like people, Bear-Bear’s cold gets worse at night. He does have his heated cat-bed for the chilly dark hours, but he obviously wants some company. If he didn’t wake me when initially getting on the bed, I could probably sleep through his wheezing. His cold is likely due to the prednisone suppressing his natural immunities, so if that medicine is reduced, he’ll have greater strength against infections.

But if a cold is the only side-effect of the drug that is defeating something worse, then so be it. Colds come and go. There is only one Bear-Bear. 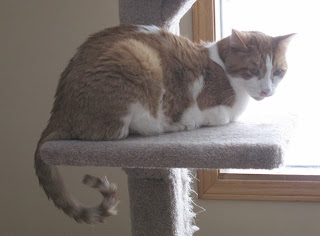