The weekend was worrisome for me, though, as it turned out, things went as well as could be expected. Tucker needed to poop, to get out what was still in his intestines, and to regulate his bowels in general. It was a tense time; I felt as though I were a father-to-be waiting for a baby to be born. I’m proud to say that the delivery eventually was made, once on each of Saturday and Sunday and twice yesterday.

I was concerned because my roly poly one made several trips downstairs to the litter-boxes each day, without producing results. That, of course, was the problem’s initial symptom. However, the medicine that he is taking, Cisapride, stimulates the intestines, prompting them to move the waste along as they should. Since they are responding to the medicine, and not to the presence of waste, I imagine that they are doing their thing even when there is nothing to move. This would cause my Tucker to think that he has to go when he didn’t really need to. I commend his perseverance in continuing to visit the litter-boxes regardless of result.

I can gauge Tucker’s health by his behaviour, of course, and he has been active and cheerful the last couple of days; not as much as normal, but close. He played yesterday, and his tail was up more than not. It drags somewhat when he tries to poop - or thinks he must - but cannot. He of course does not know why nothing is happening when he clearly feels it should, so some discouragement is, perhaps, natural.

The big test comes now. His small supply of Cisapride pills has been exhausted, and he must now poop on his own. I intend to put him in the back parlour with food, water, a cat-bed and a litter-box during the day, when I am gone, so that when I return, I will be able to discern if he - and no one else - has used his litter-box. He won’t like this treatment, but I feel that it’s the best way to know. He is not eating much hard-food; perhaps he associates it with blockage. He eats a good amount of soft-food, which is probably why he has been pooping only small amounts. After the moisture is extracted by his body, there is not much left to come out. I will be satisfied seeing any amount in the litter, as long as I see it. 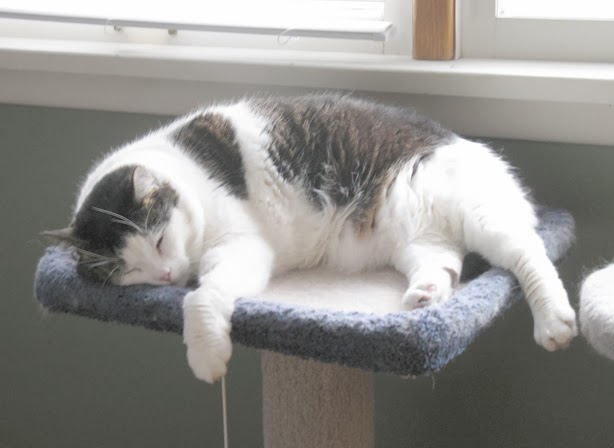