The Leopard and the Kid

I’ve mentioned before that Renn is a peace-maker. He certainly has his moments, as all cats do, of angrily telling another feline to go away or give him space. And he is a bit of a whiner - literally - when forced to do something he dislikes. I’ve never heard a cat whine before I met him. But usually he is a good natured fellow and, more than that, he will go out of his way to be friendly.

This is especially valuable when I have foster-cats. Renn slowly pushed the boundaries of what Cammie accepted, when that cat came to stay with me. He remains the animal she is most comfortable with. Now, he has turned his natural charm on Kola. 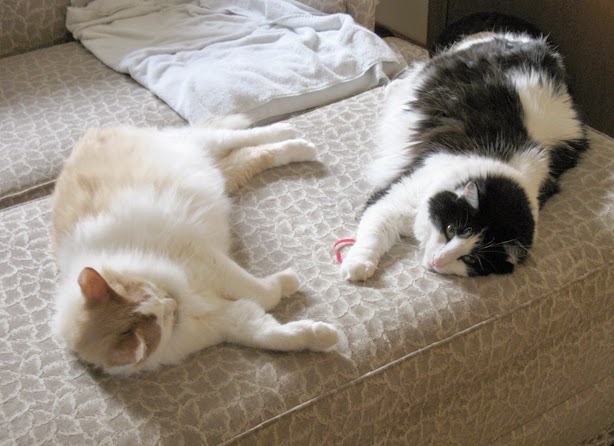 Kola has had trouble with Tucker. That roly poly has determined that he will not be the bottom-cat of a household when there is a perfectly good new, declawed cat to take on the part. So Kola has been chased and frightened by Tucker. As well, Josie will snarl and slap at the new boy. But he knows he will have no trouble with Renn. My big boy has taken to sniffing Kola with that large nose of his and the foster-cat, though wary, realises there is no harm in, and doesn’t worry much about it. He even doesn’t bother to look up as Renn passes him on the parlour couch, on his way to the window.

With Renn as a friend, a cat’s integration is smoother, and less emotionally troubled. Kola sees that not all cats are dangerous, not all cats want to hit him and put him in his place. Renn may be big and muscular but he enjoys a peaceful world. With him, the leopard truly lies down with the kid. 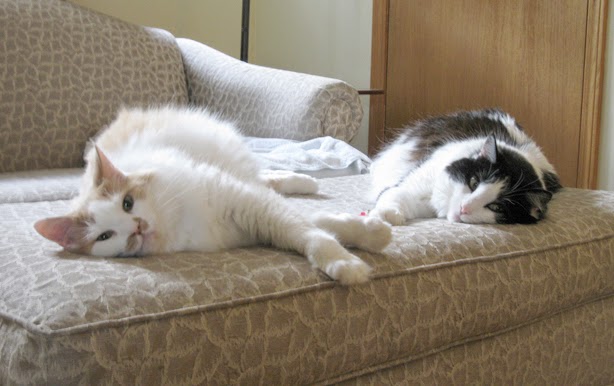