Tungsten has health problems, but she is doing well in coping with them. She has hyperthyroidism and for that she receives medicine, rubbed twice a day into the inside of her ears.

She also has kidney problems. They are the sort that may be considered serious but are not affecting her too much right now. Cats don't get enough moisture at the best of times, so to help her water-consumption, I use a syringe to shoot water into her: twelve millilitres three times a day, four on days that I have off. It seems to be working. I took her to the veterinary a couple of months ago because she was sick. That turned out to be a more or less ordinary illness caused by a germ. With the help of antibiotics, it passed rapidly. I had the doctor run blood and urine tests on the tiny terror, just to keep my views of her condition current. The doctor had not treated Tungsten before, and told me that if she (the doctor) had not read her (Tungsten’s) records, she (the doctor) would not have thought she (Tungsten) had had any problems with her (Tungsten’s) kidneys. I (me) liked hearing that.

But the orange one still gets her water treatment. Three or four times a day, I jet little streams of water into her mouth. She doesn’t like it but doesn’t fight me, either. The expression she gives me isn’t the one in the picture below. It’s difficult to take a photograph while holding a cat and injecting water into her mouth. But she looks at me each time with the same question in her innocent little face.

“Why are you doing this to me? I drink water. You know I drink water. You turn on the tap for me. In fact, I drank water just minutes ago. You saw me. You were there. Why the extra water? I’m not thirsty right now. When I am, I’ll let you know. I’ll just end up putting most of this into the litter-box anyway. I think I have to go there now. This is quite embarrassing.”

If she could understand me, I’d explain that it is helping her, and I want her to live as long as I do. Well, I tell her that anyway. But I’m not sure she’s listening by that point. 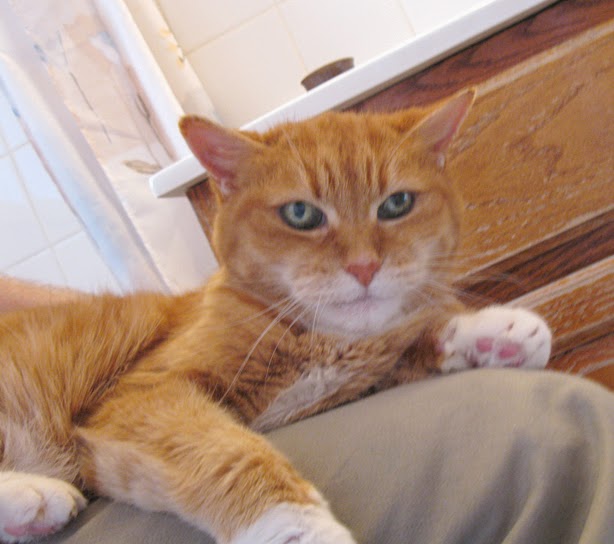