The Princess in her Domain

I am quite pleased with the progress that Cammie is making with the other beasts. She still dislikes having them around and would prefer to inhabit a kingdom in which she is pampered by largely unseen servants, who treat her as the daughter of the sun and the moon, whom the stars raised to be queen of Heaven. It’s not for nothing that her breed comes from the celestial Orient.

Failing this, she acknowledges the other cats with disdain, sometimes accompanied by a hiss. It’s true that her reaction to Tungsten is different. The Siamese princess continues to lurk near the orange one from time to time, causing Tungsten to growl warningly. But the others, she could do without. Because I can’t, she has to tolerate them.

But things are getting better. Cammie has more than once jumped onto my lap while I was sitting on the couch, with Renn to my right and Tucker to my left, on the arm of the couch. This would have been unheard of a few months ago. I can’t relax much when she is so positioned, as I am trying to keep Cammie and Tucker from coming into inadvertent contact. Usually, they pretend that the other is not there, and settle down to what historians would refer to as ‘armed neutrality’. Cammie doesn’t stay long, but the fact that she is there at all is encouraging, to write the least. (I’m sorry I don’t have a picture of this, but my hands are busy at these times, petting both the princess and the roly poly, in order to keep things calm.)

As well, she ventures into the parlour, when I am home and the door is open. Otherwise, Kola is sealed in there, safe from Tucker’s provocation. When the parlour door is open, however, Cammie will stroll in, frequently to sit at the window. Last evening, however, I was surprised to find her settled in the late Bear-Bear’s old bed. Last night was chilly and wet, so the weather may have prompted this unprecedented action. I had put the bed in the parlour because Kola used it while it was in the sitting room. Due to Tucker’s continued depredations, however, Kola doesn’t venture into the sitting room just to lie down. So I brought the bed into the parlour. There, though, he prefers the covered cat-bed, visible in the photograph behind Cammie. After the Siamese princess’s snuggle in it, I may return the BB's bed to where it is more accessible to her. 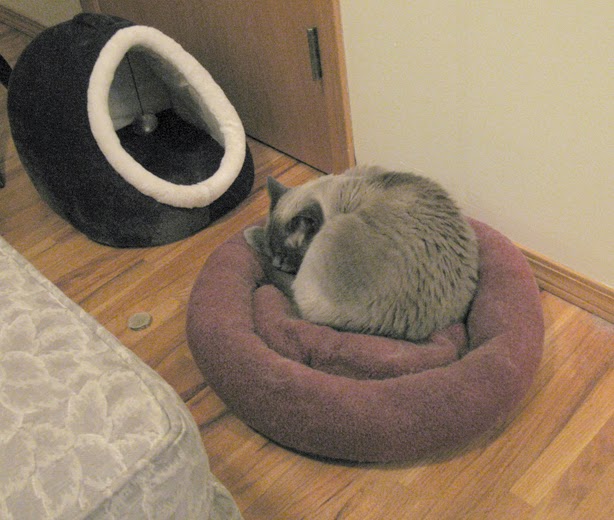 Cammie still gives a hiss as she passes by a cat. But most ignore these dutiful warnings. Kola in particular seems unfazed by Cammie’s sibilance. I theorise that the more the other beasts treat her hostility as unimportant, the less she will adopt it. In that regard, I value Kola as an ally in taming the princess still further.

And in general, Cammie is more accepting of my touching her. I will stop when I pass her to rub her head or face, as I do with the others, but which has not always been welcome by this foster-cat. We are getting to know each other more and more, and with the other cats’ help, I will soon have her leaping into visitors’ arms in welcoming joy. I figure another couple of decades ought to do it.
Posted by John Bellen at 12:28 PM