A Little Repairing and Renewing


Though it was not one of the chores I set for myself during my holidays, I wanted at some point to wrap layers of sisal rope around parts of our cat-trees, repairing them, rather than buying new trees. After all, the ones I have are still structurally sound. I have been long threatening to make these renovations and, at long last, I have. Well, I have started, at any rate. 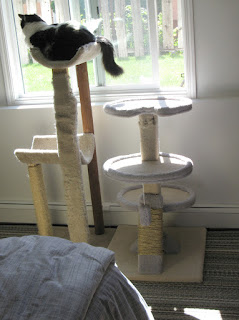 The inclined portion of the shorter cat-tree in the bedroom had been used by the cats as a scratching-platform so long that much of the carpet-like surface had been torn away, and the wood beneath was being ripped up by the cats’ claws. I was afraid they would get splinters, so I thought I would experiment first with that tree. 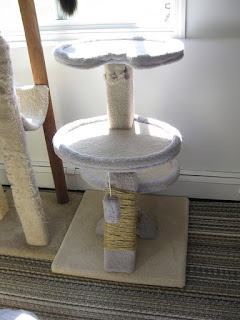 I neglected to take photographs of the ‘before’ phase, and I was not about to unwrap one hundred feet of rope once I remembered. However, this is the finished version. I used quarter-inch sisal rope, though, now that it is completed, I think three-eighths’ thickness may have been better. The shops I visited to buy the sisal did not have such a size, anyway. Half-inch was available, but that seemed too thick; it would not have been pliable enough. 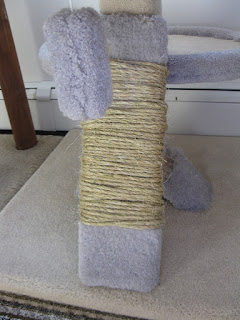 I hope that the rope won’t unravel under feline attention; I will deal with that problem if and when it arises. The cats so far have not gone near it. I suppose this was predictable. However, it is now ready for them, if they ever decide to use it. In any case, this task has given me experience, so even if this tree goes unscratched, it won’t have been a waste of time. And as you can see, they were eager to show their gratitude. 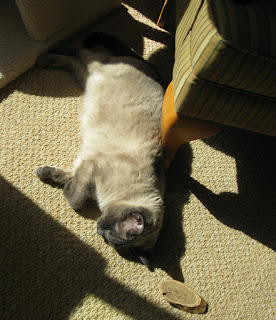