Renn is currently at the veterinary hospital. Nothing is untoward and I await the telephone call to bring him home, though that won’t be until later this afternoon.

For now, I can apprise you of Parker’s progress. I am still working to control his diabetes, though I think a major step forward has been taken this weekend. I conducted a ‘curve’ on the sturdy boy five weeks ago, and he did well. His number didn’t reach lower than twelve, but the doctor considered that to be very good, considering where he had been. It was also reflective of a stability in his insulin dosage. Then, the weekend before this one just past, I performed another ‘curve’, and Parker’s nadir didn’t reach even sixteen. This was disappointing.

I spoke to his doctor about raising Parker’s dosage, which neither of us want. We have been working to reduce it, and increasing it would be a motion backward. We considered as well switching the kind of insulin he is given. In any case, the doctor wanted me to run another ‘curve’ on my guest to make sure of the previous results.

Then, by chance, I noticed that, though he likes his current varieties of food, the orange boy doesn’t clean his dish, as he had the odd time I gave him Merrick brand chicken, the same sort the perma-cats receive. So I thought of giving him that instead. Though I was pretty sure Merrick is low in carbohydrates – Tucker, also diabetic, eats it – I researched further. I had been using a couple of charts that detailed the ingredients of various foods for diabetic cats, but very recently came across an extremely detailed chart compiled just this year – and, coincidentally, devised by a veterinary who had written some other information that the rescue-group with whom I work has used.

Parker’s two soft-foods were Koha chicken (and turkey, now and then) and Blue Freedom Grain-free. According to this new chart, the latter’s carbohydrate count is seven, just at the edge of what one wants to feed a diabetic feline. Koha, however, of which I thought better, was at eleven, and I had just started feeding it to Parker.

So prior to this weekend, I switched my foster-cat to Merrick chicken. I then conducted a ‘curve’ on him yesterday. The results showed marked improvement. Parker’s numbers dropped to twelve, even a few tenths of a point below the good results of five weeks before.

Though these are not conclusive, I suspect the change in diet was to blame for the unfortunate numbers a week ago. I of course do not want to switch any cat back and forth from one food to another. I want to keep them consistent, especially the diabetes boys. But I also want something that they enjoy. With two brands for variety – both very low in carbohydrates – and a third on stand-by in case he tires of one or another, I think I have achieved the stability that satisfies both Parker’s health and his palate. I will perform another ‘curve’ on him to make sure, but not for another month. I think his doctor will agree that the diet – its change and the timing of it – were the cause of the bad numbers.

This also means that Parker will be able to have a dental that he needs. We have been waiting for some consistency in his diabetes-treatment. After some disappointment, I believe the path ahead is now rather encouraging.

(By the way, you can probably see the sturdy-boy’s misaligned jaw in these pictures. He doesn’t need his mouth open to breath, but I think it opens when he lies like this. Who knows what happened to him before he was rescued, but his slightly crooked jaw and jutting chin don’t cause him pain – they just give him personality.) 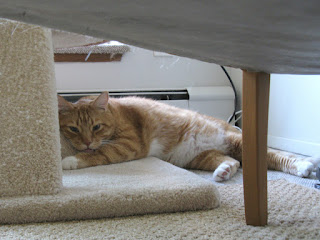 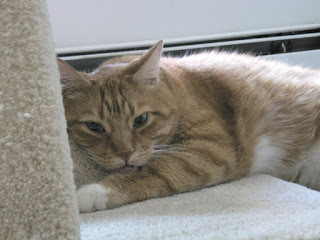 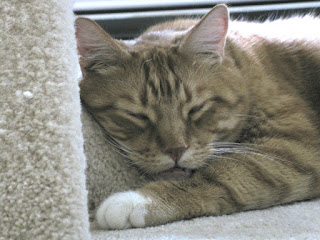