This is one of the feral cats I hope to capture. I’ve named him Raleigh. 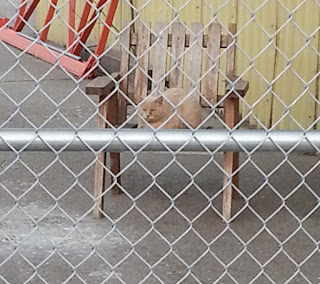 He looks rough and battered. There is something amiss with his left eye, blood or pus leaked out near it or from it at some recent point. I think he is old and possibly deaf. He is polydactyl.

He doesn’t seem to be quite a part of the feral colony behind my work-place. The other cats brush by him without fear, but he appears at times when the other cats are elsewhere, probably sleeping. He shows up in the heat of an afternoon, and tonight, he was sitting in this chair when I arrived to check the traps I left out. The other cats came by later.

No one went into the traps, least of all Raleigh. I think he is an experienced fellow, perhaps once having belonged to a human, but now fallen on hard times. He wanted food but was wary of the cages. He was not so wary of me. Brandishing a dish of soft-food like the magic wand it is, I crept close to Raleigh, close enough to push the dish under his nose. I was twenty inches away, and he kept eating even while I spooned food into the dish.

I’ve not seen him eat together with the others, though he will come at feeding times, and sit on the verge of the group, hoping. He looks solid, but his fur is thick, and it may be that there isn’t much else to him. But he ate well tonight.

I have new tactics ready for my next evening of trapping. It will involve less time, perhaps as little as an hour each night, but it will be much closer to the time when their care-taker comes to feed them, so they will be congregating, hungry, and expecting food. I hope Raleigh isn’t too much of an old campaigner to be lured inside a cage. He may be sick, or he simply may be old and tired, one of life’s discards who deserves much better than he has received.

Even if I can’t trap him, I will watch out for him, and maybe make his old age a little easier.
Posted by John Bellen at 9:12 PM