I think we all know the old saying, ‘What doesn’t kill me makes me kick myself for being stupid’.

Tonight was what has come to be called a ‘learning experience’. When I was young, it was called a ‘failure’. Well, it wasn’t as bad as that. I did learn a lesson which will be applied tomorrow or in the next few days.

I set the two traps for the feral cats of the colony behind my work-place. As I had mentioned previously, I wanted to avoid capturing the skunks who also frequent the vicinity. I initially placed one trap near the far fence, and one near the building’s rear door. The former trap I thought might be liable to catch skunks. I watched as two skunks, indubitably the juvenile versions of the pups I had seen a couple of months ago, frolicked between the cats I wanted to catch, and the food that I wanted to lure them. The skunks eventually showed far too much interest in the food, so I set both traps by the rear door. The skunks have not been known to venture near there. 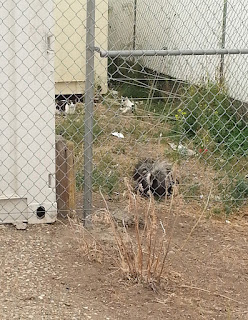 I came back about seven-thirty. I was pleased to see that I had caught two prisoners. I had been hoping to catch a big, rough-looking pale-orange boy, but I had trapped instead two of the many black-and-white cats who comprise the feral colony. Well, that was something, at least. Yes, it was something, but it was not cats. I had trapped two skunks.

I’m not sure if anyone reading this has squatted two feet away from a pair of terrified skunks, in mortal fear of their lives, cringing inside tiny cages. If anyone has, you may suspect that my fright was worse than the skunks’. Has anybody ever died from being sprayed by a skunk? I doubt it. Has anyone ever suffered dismemberment, disembowelment, head trauma? Unlikely. But as I pondered the situation, I wished that I were facing a couple of enraged dogs at that moment. Dogs I could defend myself against. Not effectively, of course, but in my mind, a canine assault was infinitely better than what I was facing. 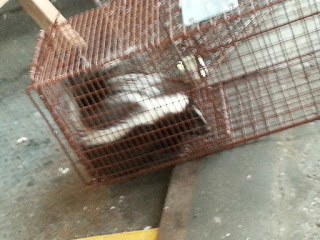 One trap had a rear door. The second, I discovered with a little dismay, did not. But it didn’t matter: both skunks were pressed back against the rear doors of their respective cages, their tails up and, presumably, scent glands armed. I would have to let them out the front gates.

I considered using one of the blankets I had with me. They were ready to cover the traps when transporting captured cats. You know, after the inevitably successful operation of this evening. I put the blanket up in front of me as a shield. Then I saw that this heightened the poor skunks’ fear. Besides, I needed both hands to raise the rings that worked as latches on the gates.

I approached the pair as I would frightened cats. Speaking low, speaking slow, speaking confidently, I told them that everything was all right, and that they were in no danger. I imagine this had as much effect as trying to coax a ticking bomb into not detonating. Keeping both eyes on the first skunk’s direction – he faced me the whole time – I slowly managed to lift the front gate. I propped it open with the blanket enough to find a long metal pole to insert under the gate. This done, I withdrew both the blanket and myself to a safe distance. Off went the first skunk. 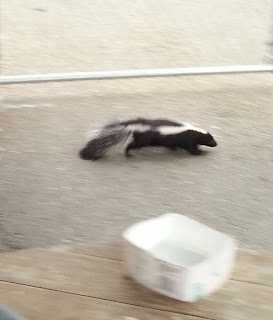 The process was repeated with the second. This one had, apparently, not eaten the bait before he found himself cornered. He was not about to leave without getting something for his troubles. He was still licking the bowl fifteen minutes later when I grew bored with his sense of justice and departed, leaving the cage door propped open. I intend to return after dark to close it, though I doubt that any cats will be in danger of being trapped at that time. Not finding any more food, they will have left, as well. 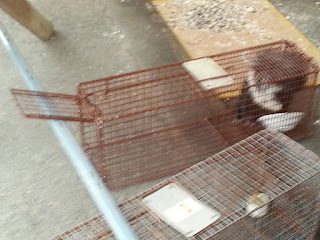 That was today’s adventure. All this time, numerous cats watched me. They were all around me, as if taunting me. I thought, “I’ll get you my pretties, and your little kittens, too!”

Tomorrow, I will call the veterinary hospital and find out when the next opening will be for feral cat surgeries. This evening’s procedure will be repeated, but I will place the traps on a table, which skunks cannot climb. I should have done that in the first place, but I didn’t think the little stinkers came this far from their stomping grounds. A lesson has been learned. I have, in the meantime, faced down the ferocious beasts and emerged triumphant. Actually, I grappled at awkward cage doors with shaking hands, begging an equally scared animal not to hurt me. Potayto potawto.
Posted by John Bellen at 8:48 PM