If I seem to be writing a great deal about Parker, I hope I will be forgiven; there may come a time soon when I won’t be writing about him at all, except in the past tense.

Very recently, I noticed that he was eating crouched low, and tipping the deep water-bowl when he drinks from it. I think he is very weak in the limbs now. He supports himself only with his front legs when drinking, and actually prefers lying down to drink. As a consequence, I have provided a lower, shallower bowl for him, and this seems to serve his needs, though he still spills the water quite a bit. 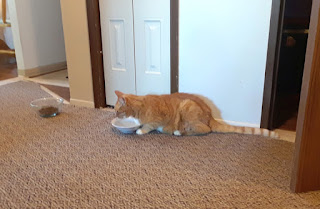 Yesterday, I did take him for a walk, though it was that in name only. He did stroll a few paces, but spent most of the time lying on the sidewalk. He purred and smelled the scents in the air; much walking appears to be too much for him. I think his time is very near. So far, he still makes it to the litter-boxes, though he cannot always avoid what is in there, and tracks it out. (A box with a lower threshold to the entrance is not practical as several of the beasts – but not Parker – wet with their bums toward the door, and the stream would simply be projected onto the floor.) I will be watching his food- and water-consumption closely – not just whether he can eat and drink, but how he does it – and his litter-box visits.

I am grateful that he has survived so long, especially into the spring, when I can take him outside again. The fresh air in his lungs, the sun on his furs and the fragrances in his nostrils must be a preview of Heaven for him. 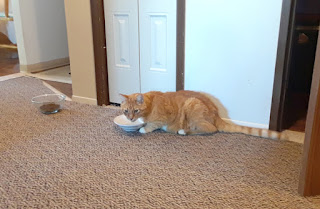