Raleigh visited his doctor today. The results of his examination were a bit disappointing to me. After more than a month on the increased dosage of Prednisolone, his stomatitis is only marginally better.

It is still showing itself around his canines at the front of his mouth, but also at the back, where there are no teeth. It is because of this that the doctor is hesitant to remove Raleigh’s remaining teeth: while it may help some, it probably won’t do away with the stomatitis, and will merely add to his stress and discomfort. 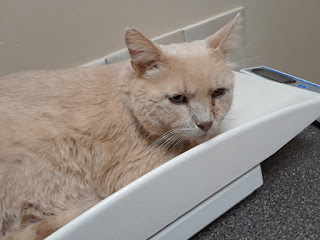 Right now, the veterinary wants to consider the matter. For myself, I am against further surgery, as I don’t think its benefits are greater than its disadvantages. Raleigh remains on his previously prescribed amount of Prednisolone.

As you can see, his time at the hospital was very stressful for Raleigh, causing his eye to run with the usual goop that oozes when he is frightened. Afterward, however, he seemed not to have been bothered by the interruption in his routine, and merely reminded me that I was late with dinner. Following a satisfying meal, he settled down into a cat-bed for a well-deserved snooze. Disappointing or not, the examination was forgotten; Peachy was home again. 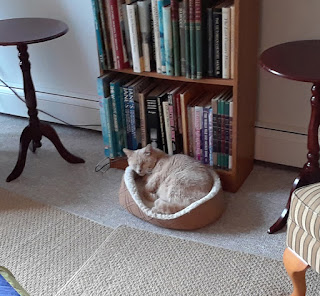