The Way She Hears It

My cats are growing old, even the young one. I dislike that, but will probably be unable to reverse the trend. I am thinking in particular about Josie, my eldest. She is 15. To be truthful, my Chubs appears to be in good shape. She is no longer actually chubby, and is a pretty good weight for her size. She eats well, her litter-box visits are untroubled, she climbs the stairs to the bed without signs of strain and she even leaps from the cat-tree by the window over to the bed, and vice versa, when she wishes to take a short-cut. She does make ‘old-cat’ sounds, though I make ‘old-man’ sounds now… But I think she is becoming deaf.

Today, after a long while without them, I decided to give some Temptation Treats to the beasts (except for poor Cammie, who can receive nothing but her Z/D food). I shook the bag and cats came tumbling out from every crevice in the apartment – except for Josie (and poor Cammie, who knows she won’t get any). Josie remained on the bed, slumbering but not asleep. Renn, who had been unconscious in the bedroom, heard the inviting sound and hurried out, but not the Great White.

I then realised that there have been many instances recently when I had announced ‘dinner’ or ‘snack’, and Josie had ignored me, until I came up to her and repeated the words at close-range. She is also startled more often by my approach, or, rather, by my appearance near her, since I wonder now if she can hear my approach.

But deafness is, perhaps, no surprise. I am dubious of the oft-reported age-equivalency of cats and humans. According to Catster, Josie is no longer even a ‘senior’, but a ‘geriatric’, having reached the equivalent of 76 years for a human. I figure that if the average cat lives, all things being equal, to be about 18 or 19 years (splitting the difference makes it 18 and a half), and a human’s expectancy is about 80, then Josie is 65, which, given her health, seems a better estimate to me than 76.

In any case, I think that some difficulty in hearing, or even complete deafness, is a relatively minor complaint for an old cat, considering what she could be suffering. There is much to beware, and my guard is always up for my beasts; however, I am thankful my Chubs is not facing worse. Besides, she may be ignoring what I do and say due to deafness, or simply because she’s a cat. I may never know for sure… 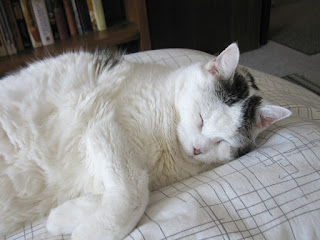