Tucker Under the Microscope

Tucker went to the doctor on Monday. I am worried about a several things, including his constant weight loss and the bald patch on his back. The doctor was puzzled as to the causes, the bald patch not seemingly due to excessive grooming - I have not noticed Tucker licking that part of his body at all, nor have I thought that he is grooming himself overly much - and the diminishing weight not the fault of any superficial problems. I think the latter may be caused simply by the roly poly not eating enough, so an antidote may be just to make food available to him more often. The loss of hair is not through an allergic reaction, the veterinary believes. 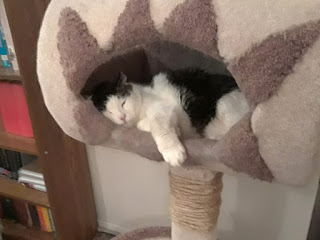 Tucker is developing cataracts, not an unusual corollary of diabetes, but they are not annoying him. His vision is likely not as good as it has been.

Blood and urine samples were taken, and a complete range of tests for a senior cat will be run. I will know the results tomorrow or the next day. 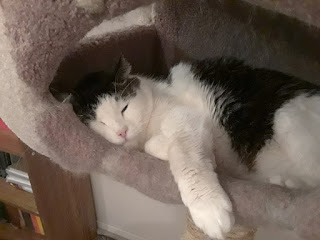 To be honest, I sometimes wonder why I take my cats to the doctor. The veterinaries help in many cases, but in some, they seem just as uncertain about symptoms as I am. Oftimes, I think tests simply rule things out, rather than confirm suspicions. The doctor was pleased that Tucker is receiving salmon oil; I have noticed that my cat’s coat is smoother and he has less dandruff. That, however, is a minor victory compared to what I want accomplished with his other problems.

But I will await the results of the tests, and then discuss the matter more fully with the doctor. Hopefully, there will be some answers to the questions my boy is posing.