The World Out of Joint

Cats love their routines (right up to the moment they change them). Tucker is no exception. The roly poly lies mainly on a chair at the dining table. While he uses the other two chairs, he prefers the middle one, farthest from the wall. This is convenient for watching me eat and begging food from me. 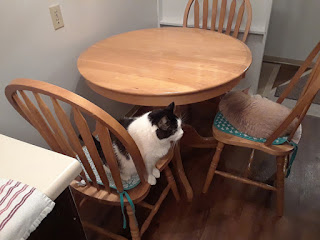 Raleigh, for his part, is becoming ever more confident (though he still scurries from me in sudden fear now and then). He has spent a short part of the night on the bed, with me and three other cats, twice now, and sleeps there at other times of the day. He has also slumbered on a dining table chair more frequently than used to be the case.

One evening last week, when Tucker occupied one of the other chairs, Raleigh jumped up on the middle chair. My sausage-cat doesn’t care for Peachy’s proximity but is slowly adapting himself to the inevitable. He evinced no anxiety over Raleigh sleeping in ‘his’ chair. No anxiety until he observed that I was about to sit at the table with some tea and a snack, that is. 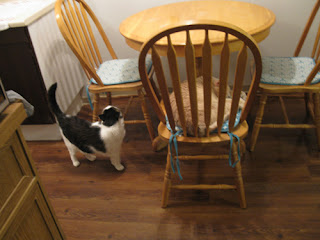 Tucker needed his usual chair to sit in and lean close to me, both to make it clear that he wanted some of my snack (whatever it was; it didn’t matter) and to be close enough for the quick grab if something were offered. But Peachy, with his growing confidence, wasn’t about to move, even when I walked close by. Tucker became upset. Human food was in the offing, and his place in the proper chair had been usurped. 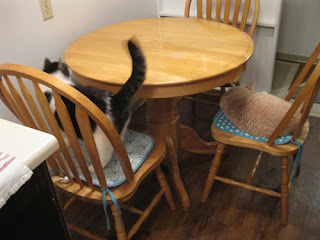 He wandered about the table, he jumped up on the two vacant chairs, he jumped down, he cried in increasing panic; he even leaped onto the table itself. Sitting in the only available chair after I claimed one would have been no good: it would have been as far away from me (and my food) as one could get at the table. 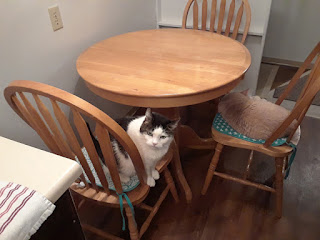 The world is a precarious balance for cats. Everything must be just so. If it’s not the way it should be, tempers rise, stress builds and all life is threatened. In some ways, cats and people are identical… Fortunately, with my human reasoning skills, my genius for compromise and accommodation, my desire to do the best for all concerned, I was able to arrive at a solution. I took my refreshments and sat on the couch in the sitting room.