An Unexpected Visit to the Doctor

Josie gave me a scare this week. Thursday morning, I woke to find her out of sorts. She usually starts moving when I do each morning; takes a long drink of water from the bowl on the window ledge, sometimes follows me out to the kitchen for breakfast, sometimes awaits it on the bed, but in general has an active routine she follows. This day, she continued to lie, not in the saddle of Cammie’s cat-tree, but on a lower platform of the one next to it, which is abnormal. She ate, but without enthusiasm, and drank some water later.

The unusual behaviour continued in a similar vein when I returned from work that afternoon, and did not change by Friday morning. I made an appointment for Josie with a veterinary. It was not with her usual doctor, however. That hospital was booked solid for more than a week, except for a few times in the middle of days. I had taken a day off here and there recently to attend to other matters, and my department is still flying at half-staff, so a mid-day appointment was not practical. Another hospital, however, was available; moreover, it was one whose doctor I trust, as the rescue-group to which I belong uses her services. And they could take Josie late Friday afternoon.

My Chubs had a physical examination, and a sample of her blood was stolen. It had been more than a year since she had last suffered a full exam, so I wanted everything tested, including urine. What I was afraid of was a worsened kidney condition, perhaps even final failure. What was transpiring was a urinary tract infection. 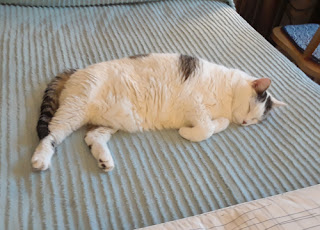 This came as a surprise. I am normally attendant to the number of times my cats visit the litter-boxes, and I am certain the Great White had not resorted to them much more than usual. I had noticed that, instead of the very occasional missed box – a relic of Josie’s over-weight days when her bum would overshoot the interior – she was wetting outside the box more often than not. I had considered arthritis or other joint-pain to be causing discomfort in climbing into the box; I had not considered an infection was deflecting her aim.

But this malady is preferable to kidney shut-down, of course. Josie was started on anti-biotics as soon as she arrived home. It is to continue (a milliliter of medicine twice a day) for a fortnight. The first dose caused a great improvement in her condition by that night; Josie has not had recourse to such a drug in years, so it had a tremendous effect. She was eating – and, as important, asking for food – by snack-time, and was behaving more as she should. But we will hammer the infection for two weeks; then my Chubs will go to the doctor to see how things stand.

Otherwise, Josie is, as I had hoped and suspected, in good shape for a sixteen year old. Her heart and lungs sound good, she is an adequate weight and – a pleasant surprise – her kidneys are actually functioning a little better than they were a year ago. She may need some extra fluids in the near future, but the veterinary did not think it necessary right now. Josie might indeed be suffering some arthritis; I asked the doctor about giving joint-medicine, to which she agreed. I have a bottle of that coming to me early next week.

The doctor’s visit, perhaps overdue, relieved my mind on a number of points. Josie ate well today, and her behaviour is nearly back to normal. My old lady will get well, and back on track to become even older. 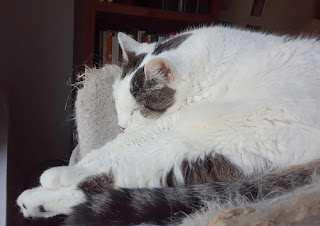