Their Names Were Cammie and Raleigh

I received Cammie and Raleigh’s ashes last week. Because they were cremated through different veterinary hospitals, their caskets are different. Cammie has a simple one, like Parker’s, but in black. Raleigh’s is a little tomb. It’s amusing, in a way, that my princess’s ashes are in a plain box, while my ‘charity case’ reposes in a tiny mausoleum. Well, perhaps Cammie would not think it funny…

I have also framed their photographs. Cammie’s was easy to choose. It is my favourite picture of her. Her expression was often more dead-pan than this, but now and then, she appeared a little melancholy. Though she purred, and purred well, she always struck me as a little sad, perhaps wondering why she didn’t rate better subjects than the cats and human who lived under her suzerainty. But the photo shows her subtle colours, and the brilliance of her green eyes, before they went black. 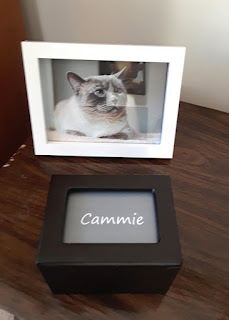 Raleigh never had a professional photographer capture his likeness. I wish one had. Peachy was just not photogenic. He always had a slightly bedraggled look, his eyes droopy, his face tired. The impression thus created was belied by his behaviour when he was well. He would play exuberantly, and those big spatula paws of his made him look even more kitten-like than his actions did. In the end, I selected an image of him snoozing on my bed. I think at the time his fur had not yet been rid of all its mats, so he looked rather shaggier than he became. But this was him sleeping near me, unafraid, secure and content. My ugly spaniel. 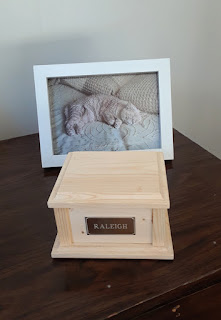 I have run out of room on the little dresser for all the urns and photos of my departed friends, so I have now arranged things differently. Their pictures are on the wall above the dresser-top, which still holds their remains. I can see them all when I go to bed, and when I wake again in the morning. There are now two more than there were just a month ago. Their names were Cammie and Raleigh. They were my friends, and I will remember them. 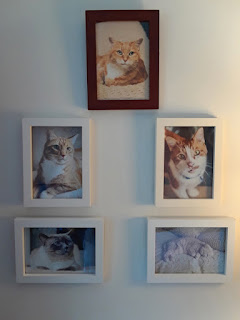 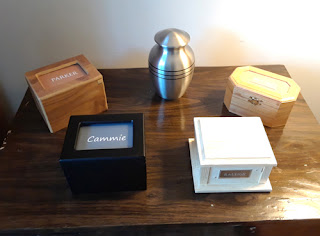 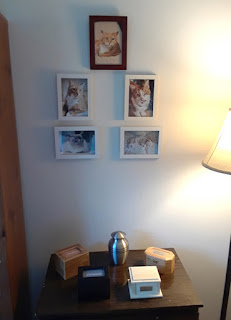 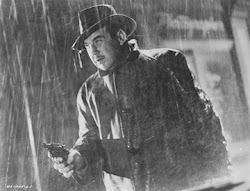