We had quite the storm last night. The clouds gathered in the afternoon, then dispersed, only to reassemble in the early evening. About eight o’clock, the sky was gloomy and grim, and lightning flashed constantly. We were sent a tornado warning by Environment Canada; while such warnings occur in the summer in my part of the world, they are not common. This was, however, the first time I thought the weather directly overhead justified such a precaution.

The warning included the advice to take shelter in a basement. I have no basement. I do have cats, however, and, though fewer than priorly, I have enough under which to bury myself and have them absorb the shock from any destructive force. They are also good for use against concussion grenades and tactical nuclear weapons…

On the subject of the cats, they behaved well. None was much concerned with the storm except Tucker. He, my most sensitive roommate, retreated to the closeness of the nylon tunnel when the first thunder rolled. I certainly don’t blame him; it must be frightening for an animal not to understand the causes of such noises and illuminations. There was one particular lightning bolt that brightened the heavens, and which was followed by a very loud crack. I thought that might move some of the other beasts, but they were unperturbed.

The storm passed, and Tucker emerged. The violent weather had begun at snack-time, but only he had allowed it to disturb his eating. Perhaps as a consequence of that disturbance, the roly poly one had a better than average appetite afterward, and ate well from his soft-food servings.

The light-show introduced a downpour. This, despite – or because of – its intensity, did not last long, and the storm soon broke up. The night was cool, refreshed by the precipitation and released of its tension by the lightning. Though I could do without the threat of a tornado and its possible damage and injuries, I do, in the words of Mr Rabbit’s song, “love a rainy night, I love a rainy night; I love to hear the thunder, watch the lightning as it lights up the sky.” After the storm, I and the cats – Tucker, too – “woke up to a sunny day.” 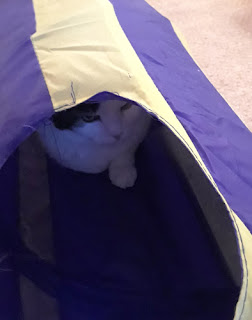