The purchase is usually occasioned by the cats, it may not shock anyone to read. My bedspread was in tatters. It resembled the stereotypical cloak worn by a leprous mendicant begging for alms at the edge of a medieval village. My bedspread, however, had more cat-hair. It was also tremendously thin. Once upon a time, it was intact. Then Renn misjudged a jump up to the top of the mattress and recovered himself with his claws. Like a piece of movie-film, the disintegration of which due to sudden heat is displayed in great and enlarged detail on a cinema screen, the bedspread fell apart from there.

The blanket under the bedspread fared similarly, sharing the bedspread’s damage and acquiring some of its own, apparently hoping to establish an independent franchise of physical ruin. It became so ragged that I had to turn it sideways, as the ends had completely torn away, and no longer gave it the necessary length.

Certainly, the duration of my suffering with these pitiful cottonary remnants was my own fault. I like to have exactly what I intend to have. Buying a substitute for my goal merely makes me dislike my lesser purchase, and extends my search for the real thing while intensifying my dissatisfaction with what turns out to be nothing more than a stop-gap measure. I wanted a bedspread, not a coverlet or a quilt – both fine bedclothes, but neither of them bedspreads. The bedspread, like the shoe-shine man, is a dying feature of our modern world, it seems, and a relic of better times. So too, strangely, is the humble blanket, once ubiquitous in households, and now replaced by the likes of the aforementioned coverlet, and the horribly named ‘throw’.

But I found them at last. They arrived this week, and I placed them, newly washed, on the bed, along with clean sheets. I am sufficiently proud of this very minor achievement to feature them in today’s blog-entry, ousting the cats from the central subject, but not, you will note, wholly from appearance.

And yes, I believe Josie is laughing at me in the last photograph. 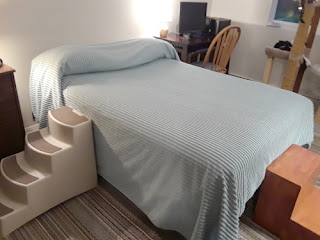 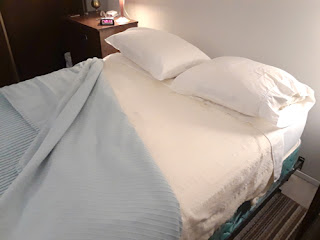 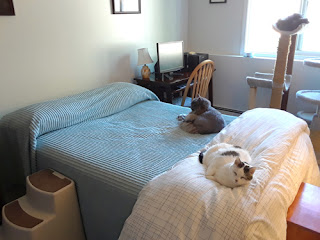 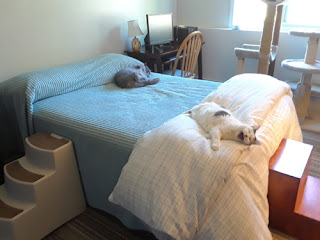