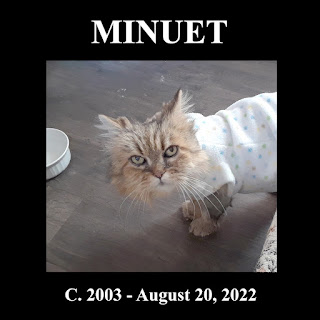 I wrote Saturday’s blog-entry in the morning, and, despite my hopes then, Min’s condition deteriorated. By the afternoon, she was visibly in distress, breathing rapidly and unable to find a comfortable position in which to lie. She tried to hide, burrowing into a corner and, even when I brought her out, crawling under Tucker’s Tuffet. As I wrote to a friend, Minuet may have improved if I had been able to keep her alive, but it would have been some time before any improvement could have been seen, with, in the meanwhile, a nineteen year old cat in pain, being injected and force-fed continually, given pain-killers to dull her discomfort. It may have been weeks of misery for Min, and to what purpose? I would have given an ancient cat a few more months. By then, she would likely have been happy to leave her life. Her sudden weight loss suggested something I couldn’t repair anyway, and it may have been pancreatic cancer. Yesterday, I wrote that things depended on Madame giving me more time. Of course, time isn’t always ours to give, and Minuet did not have it.

I called Min my very-oldster; she died with the dignity befitting her years, and now is where age no longer matters.