There Was a Young Feline Who Swallowed a Fly

I don’t know why he swallowed the fly. He definitely won’t die.

Yes, Hector caught a fly yesterday. He’d been following it for a while; there’s a possibility that it was the same one he was chasing some days ago. In any case, he won’t be chasing it again. He cornered it – if one can corner anything against a flat surface – by the window pane in the bedroom. I saw him patting the glass repeatedly, then he bent his head and started chewing.

It clearly didn’t taste good, as he had the same tongue-lolling, overly robust mastication we all have when we eat something unpleasant. It may have been like munching on a candy flavoured with Buckley’s Mixture. And then he drank, rather urgently, a great deal of water.

The important thing is, however, that he caught the fly. And if he sees another, he will likely repeat the performance, right down to comsuming his prey. That’s the sort of fellow he is.

But I still don’t know why he swallowed the fly. 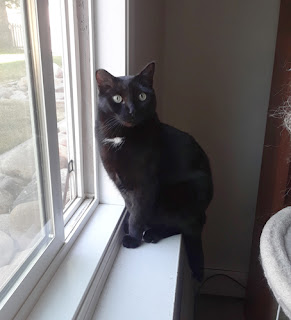