What Neville Cares About

We are enjoying the weekend at the Cosy Apartment, though with the temperature at 35° Celsius (95° Fahrenheit) most days this week, and predicted for most days next week, some may think the cosiness a bit overdone at the moment. Nonetheless, we won’t complain too loudly if that is the only problem we have.

The fact is that I am pleased today. I am conducting a ‘curve’ on Neville, my diabetic foster-cat. Most readers of this blog are likely familiar with the term: it is a day-long test of a diabetic’s blood-sugars. Before the first of two of Neville’s daily injections of insulin, I take a reading of his glucose levels. I do that every two hours until after his second injection, twelve hours later. It gives an indication of the effects of the insulin on his blood-sugar throughout the day. If one were to draw a dot on a chart for each reading, and then connect those dots, ideally it would form a curve: the blood-sugar decreasing gradually to its nadir (lowest point) and then climbing as the insulin’s effects wear off. I tend to increase the frequency of the testing to one hour, rather than two, as the nadir approaches. If the test at one o’clock has a result higher than it was at eleven, this will narrow my knowledge of the time at which it started going up again.

Anyway, Neville has been having quite shallow curves over the last few months. The effect of the insulin is present, but it is not an impressive effect. In other words, his nadir has not been very low. Bearing in mind that judgement of diabetes’ effects depends on other things than blood-glucose numbers (eg. thirst, hunger, rear-end weakness), I nonetheless have been dissatisfied with the Nevsky’s numbers. They have been innocuous, rather than desirable.

A month ago, I started him on five units of insulin in the morning and six in the evening. These are high, and I determined not to go further; in the past, Nev had been at seven units twice a day. Increasing the dosage can itself create a problem. It is called the Somogyi Effect. This is when the dosage of insulin is so great that it lowers the blood-glucose levels to a dangerous amount. The body then compensates by releasing its reserve forces (eg. cortisol, glucagon), which increase the blood-glucose levels so much that it may be thought the insulin is having no effect. In such a case, there is a danger of even more insulin being injected to knock back what is believed to be the unaffected blood-glucose. We of course can’t read the initial hazardous drop in the level which induces the body to fight back. We just see the results of the body’s counter-offensive.

However, I am confident that after a month of this new dosage, and irregular spot-checks, the effects and counter-effects are in balance. For one thing, Nev’s numbers today demonstrated a healthy response of the body to the insulin. As well, he has not been exhibiting any unusual behaviours.

Nevill’s numbers started high (23.3) but fell, gradually, to 13. This is quite a ways, really, from perfection (4 to 8), but, as mentioned, more than just numbers must be taken into account. Tucker’s nadir was habitually double-digit, but his doctor, who knew him for years, was satisfied with his treatment. (Ironically, the roly poly’s last two ‘curves’ saw a better nadir, though this may have been influenced by the cancer that eventually killed him.) I like Nev’s ‘curve’ today, and intend to stay with the current dose. If this maintains its effects, I will eventually try lowering it again.

The Former Thin Man (I can’t believe he was ever under-weight!) detests ‘curve’ days. He has not Tucker’s resignation to the ordeal. It wasn’t helped by the fact that blood was hard to find in my boy’s ears this time; I don’t know why. Therefore, he does not share with me my pleasure with today’s results. He does not care about today’s results. But now, he is free to enjoy the remainder of the weekend. That, he cares about. 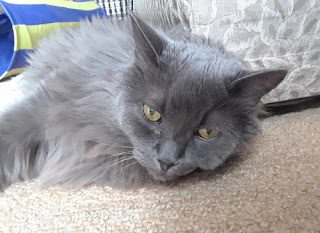