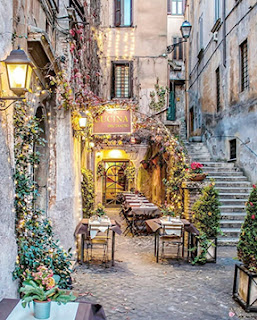 No, this isn’t Café Cosy - except in my imagination - but my outside food- and water-bowls do figure in today’s article. Last night, I saw two new cats taking an interest in the fare I left outside.

I have seen them previously, but separately. One is a tabby, brown, I think - it’s difficult to determine when the dark night is lit only by a single weak electric bulb - with a very dark stripe down his spine. The other is a white and orange cat, whom I thought might have been Arliss, Sable’s friend. But this fellow has a slimmer body and a larger head.

I initially thought I was seeing Sable, but then realised it was the tabby, with his friend sitting a few feet away. I do think they are friends, as they sat or lie near each other; the tabby seemed more dominant, but was not aggressive; they clearly knew each other. I have no idea, of course, whether they are owned cats or strays, or if they are female or male, though from their behaviour (and the orange one’s colour), I will tentatively call them the latter. I can’t know whether they are fixed. They seem wary, though not feral.

Since they come to Café Cosy irregularly, I can’t depend on seeing them at any given time. After I went up to the outside door, mistakenly believing I was greeting Sable, the pair moved away, though not far. They didn’t come closer while I was present, so I added a bowl of soft-food to the evening’s menu. This morning, it had been licked clean, all of the hard-food was gone and much of the water had been drunk. There was little mess, so I don’t believe I was visited by raccoons. I left the soft-food hoping that my two new customers would realise that the café was a good spot at which to refresh themselves, and return.

Time will tell if my plan worked.