It’s been a month since Tucker’s surgery. He has made a remarkable recovery. It must be remarkable, as I am remarking upon it. Anyway, he had a slight complication due to a minor infection. This was cured by some antibiotics; it took less than a week for that problem to be cleared up, and since then, he has gone forward and not looked back. 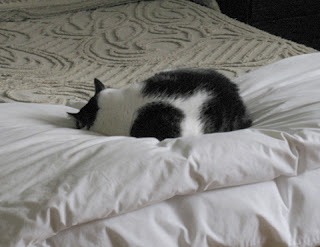 He is more active than ever, the picture above notwithstanding, and has returned to his usual cheerful nature, purring as soon as I talk to him, when I touch him and, sometimes, just when I look at him. He runs and jumps when playing, and plays by himself often, leaping on toys, knocking them about and rushing around the house. His enthusiasm for action can be a bit excessive, as I will describe when talking about Rachael later on, but for the most part, I couldn’t be happier with his progress, especially since he has suffered none of the subsequent emotional distress that he had on other traumatic occasions. 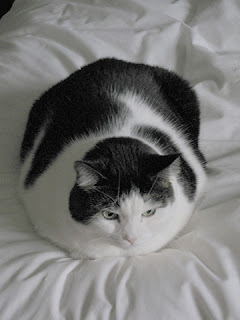 As well, his wetting outside the litter-box appears to have vanished. I still have boxes in odd places (corresponding to where he insisted on going to the washroom) but will gradually move them to more suitable locations. Until then, I am content to let them stay where they are. Tucker is using them - as are the other cats - and that pleases me. 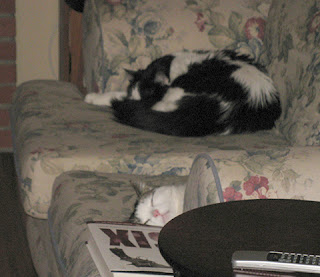 My roly poly is a joy, and the amount of money I spent on him seems smaller each day he is with me. I was thinking that if something had happened and he passed away even just a week after his surgery, the cost of the operation would have been worth it, because he was happy during that time. Now, four weeks later, he is enjoying life, sleeping on the bed with me and his roommates at night, eating well and literally frolicking. I hope he continues to do so until his last day, years and years from now. 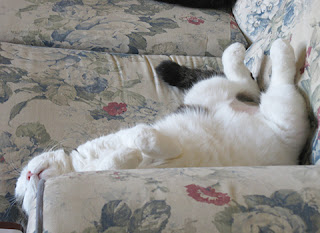