The relationships cats have with each other are sometimes strange. Most cats like people, though many are wary of them, certainly of strangers. Of other felines, many cats are especially cautious. A cat may never develop any liking for another of its kind, though in that case it usually just does its best to ignore the other animal, and to live its life as a solitary beast, content to be friends with its human.

Sometimes, great and lasting bonds are made between cats, bonds that are so strong, one will pine and die when the other passes away, having lost its best friend. Other times, a little progress is made, only to be swept back in a regression, such as has happened with my foster-cat, Rachael.

I have mentioned before that Tungsten and Renn have become friends. They often lie next to each other when I have a bath, snuggling on the bath-mat. Tungsten is quite tolerant of the big boy’s antics at bath-time, and once he settles down, he sometimes settles on his smaller friend. This past Saturday, Tungsten was quietly sitting on the mat while Renn whirled and rolled and twisted and purred - as he usually does at that time of week. Then my big boy threw himself to the floor and knocked poor Tungsten into the side of the tub. Tungsten picked herself up and walked to the other end of the mat. Being friends doesn’t mean never being miffed at one another… 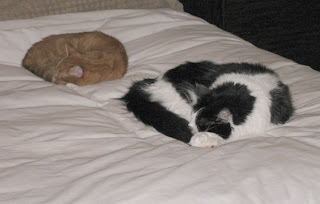 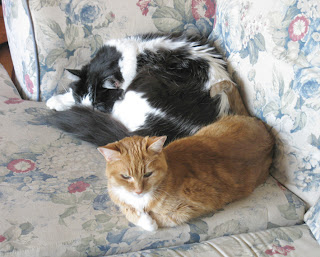 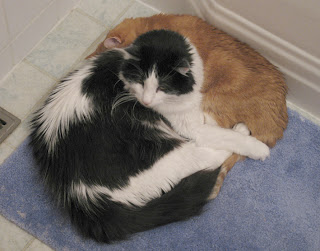 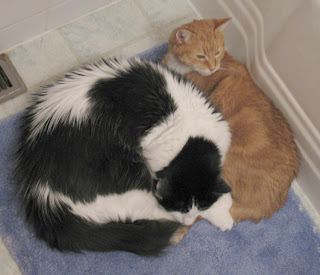 They like to spend time together, though they don’t play with each other. Theirs is a more sedate relationship, and manifests itself most frequently when they are resting. One will groom the other, though that activity is usually heavily weighted in Renn’s favour, he preferring to receive the attention, rather than give.

Josie, my little loner, has exhibited the greatest changes over the years, I think. Aside from her relationship with me, which has improved (she purrs much more easily than she used to), she has grown a little more tolerant of the other cats. She and Tucker chase each other - but only at a certain time of certain days. They do it when I return from work on weekdays. They run about for five minutes, in and out of the nylon tunnel, into the parlour, down the stairs. Then it’s over. I’m not surprised that my roly poly would play with Josie; he is always trying to get another cat to play with him. Whenever Tungsten shoots through the house on one of her speedy jaunts, Tucker trots after her, hoping this time she will play with him. He’s had no success so far.

My Chubs grooms Tungsten once in a while, always at night, on the bed, if they happen to be in proximity to each other. This past week, I watched her do that, after which Tungsten rewarded her with a smack on the head. I don’t know what that was about; perhaps Josie didn’t, either.

But the Great White’s biggest transition may be the most subtle. I don’t even know if it’s happening. I am finding her and Renn snoozing near each other more often. Usually, they are not in contact, on the bed together but a couple of feet apart; sleeping on neighbouring chairs. The strange thing is that under normal circumstances, Josie does not care for other cats coming near to her. She will give a squeak and swing at them or quickly move away. But once in a while, the need for companionship comes over her, I think. It’s taken only four years, but maybe she's finding a friend. 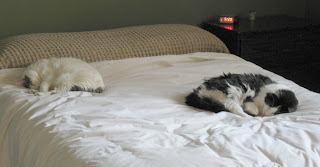 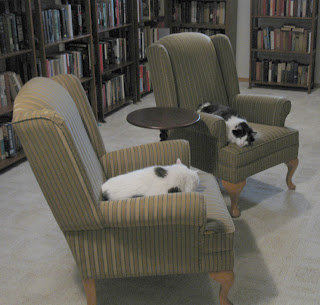 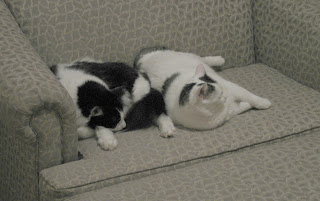 Cats will change their feelings over time, I think. They will come to appreciate other animals and different people. They are patient when it comes to evaluating a situation. If at first they dislike it, they may change their attitudes. They may not. After years of keeping their distance, they may suddenly become close. They may not. Living with cats is similar to reading a mystery novel, since one must wait until the final page for the solution. Sometimes, however, it feels as if the Great Author has torn out that final page, and I’ll have to wait until He explains cats to me. Then again, He may not.