I bought a new rug. The old one was good; it was second-hand, a gift from a friend who thought that I needed a rug in the sitting room. She was right. It suited the look of the room and provided a bit more warmth, which could be felt especially when I was sitting in the armchair or the couch with my feet on the floor. Even with slippers, the bare hardwood could be cool. I imagine the cats felt the same way.

However, the old rug was growing a bit discoloured. The cats had thrown up on it too many times. That was mainly due to Josie, who, when she wretches, must do so over and over, seemingly reaching back to the previous week’s meals for ammunition. And of course, she hurries to any difficult-to-clean-carpeted surface to relieve her queasiness. The final straw was when Rachael disgraced herself on the rug a few weeks ago. It wasn’t the sort that was easily picked up or cleaned.

So it was time to buy a new rug. The floor went without one for a fortnight or so. The cats didn’t care for that, especially Josie. It was not because she had no where to throw up. A determined cat will always find a spot for that. No, she liked to lie on the old rug more than the other cats did. She would flop over on to her side to encourage me to pet her, and when we played. She did that with reluctance on the bare floor.

The new rug is a little thinner than the old, but softer. The cats examined it, sat on it and lie on it. Most thought it was adequate. Josie loves it. The warmth of the floor has been restored to her. She was very active during play-time that first evening. (‘Active’ is a relative term. Josie does not run and leap and climb cat-trees while playing, as Tucker now does. My Chubs rolls about in one place - actively.) She was clearly pleased with my purchase. I am too, since it was cheaper than I had expected. And just as important, Rachael has not mistaken it for a litter-box, yet. Tungsten seems to approve and my Roly Poly likes to skid into it, folding it up like the bellows of an accordion.

It’s hardly a rug woven in the markets of Bokhara, and when it comes to things to put on the floor, my taste is mediocre at best. But the new rug has been accepted by those who will be most in contact with it, so I’m content. 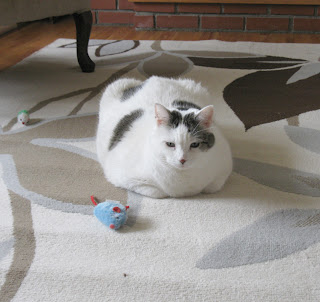 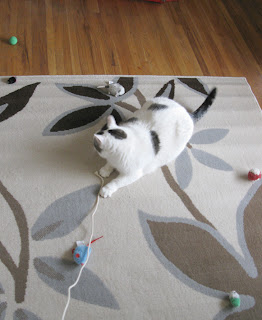 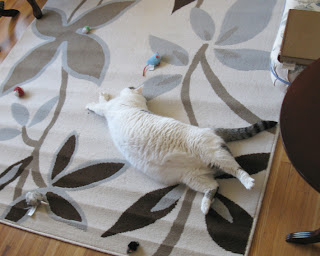 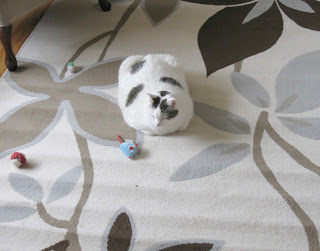 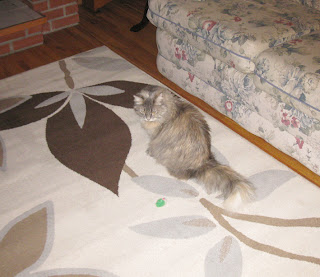 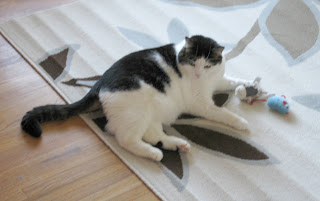 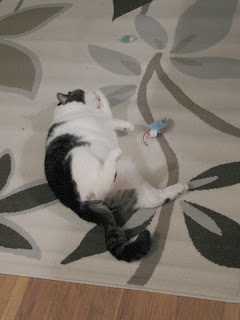 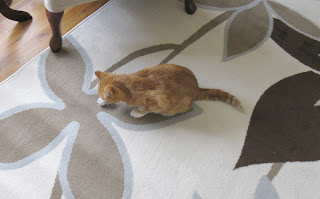 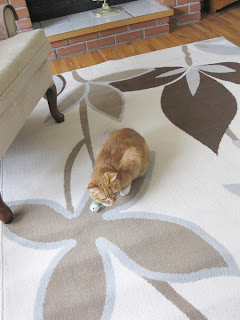 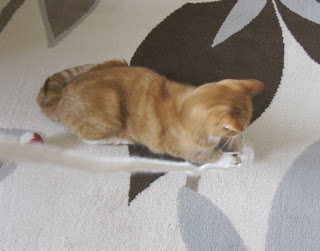 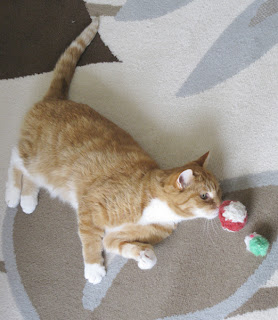 I couldn’t get a picture of Renn on the new rug, so in order not to leave him out, here’s one of my Big Boy - not even on a floor... 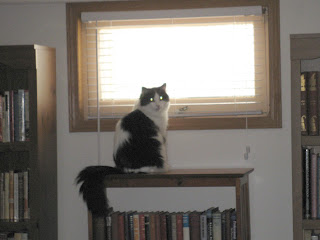