Rachael made a visit to the veterinary office yesterday. It involved minor surgery, but since she had to have anaesthetic, there was a concern, as there always is under those conditions, no matter the health of the cat. I am pleased to report that she came through the ordeal very well.

She had quite a bit done to her, the poor girl. The principal reason for her visit to the doctor was to have her teeth seen to. A number were in bad shape, and a couple were extracted. The whole lot was cleaned. She may have been suffering some discomfort, even pain, from the condition in which her teeth had been, but should be feeling much better now. While knocked out, other aspects of her health were attended to.

The dreadful mats in her hair were so strongly embedded that it was better just to shave most of her body. Thus, she looks like a tiny lion. Her head and neck were spared, as were her forelegs, giving her the same sort of coat as a bison. But her back legs and the end of her tail retain their hair, too. She looks decidedly smaller. Her weight, as it turns out, is more than nine pounds, which I find incredible, considering how light she feels to hold. 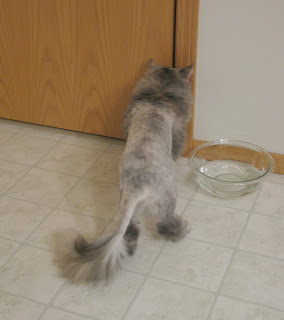 Her claws were clipped, which makes having her on my lap much more pleasant for me. She kneads a great deal, so I no longer have to see spots of blood on my trouser legs. A sample from her bladder was taken for testing. I haven’t heard the results yet, but I expect she will be fine in that regard. This test was more in the way of a precaution, due to her excessive wetting earlier. That has diminished, and she not only using the litter-box exclusively now, the amounts that she leaves there are more normal than previously, and in better shape. 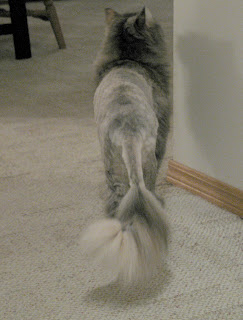 She was active when she returned home, wanting out of the downstairs bathroom where she was put. I let her roam the basement for a while, but kept her downstairs until this morning. She was given plenty of comfort to make her semi-naked state less cold. A heating pad was inserted under the quilt upon which she has been sleeping, and a fuzzy dome of a cat-house provided, as well as another big, warm mat. I brought several items, including the heating pad, upstairs this morning, when she was transferred to the parlour for the day.

She was very hungry last night after her fasting, and wolfed down a small portion of Fancy Feast, and a second, a couple of hours later. I couldn’t give her too much, of course, but I gave her enough to assuage her hunger for a while. I provided a bit more this morning. I am hoping that this opportunity will give her a fondness for Fancy Feast and, later, Wellness or some other nutrition. Before surgery, she ate only Almo by way of soft-food, and I wanted to give her a brand that provided her with more nutrients. I figured that if she were hungry enough, she’d eat even what she previously didn’t like. It’s worked so far; I want her to retain her liking for the different food. 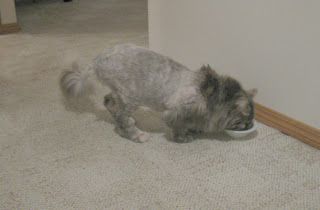 But so far, so good. Rachael improves each day. This surgery, the greater health in her mouth, the destruction of those mats, will make her life much better. Whether she interacts more amicably with my perma-cats remains to be seen, but health first, friendship second. Even though there is less of her now, what there is, is in good condition.