Rachael is my current guest-cat. I am fostering her for the Lethbridge PAW Society, but things aren’t going as smoothly as I would like. In fact, there has been a bit of a regression for this poor cat.

Initially, her interaction with my perma-cats was guarded, cautious but promising. She growled and hissed at the boys and chased Renn from time to time, but it was nothing serious. I thought, after the debacle of Luther, that this was how the integration of cats is supposed to be. She even consented to eat relatively near to some of the residents. 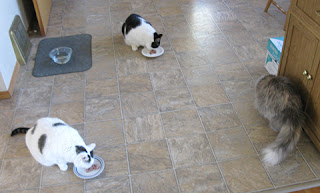 However, Rachael has turned out to be feeling more than the usual amount of stress. This is not surprising. She had been taken from her home, from people who no longer wanted her (after four years) and dropped into a strange situation with strange and, so far as she knew, hostile cats. She started to fight more often with Renn, and began wetting where she shouldn’t. I had to put her in isolation (the back parlour) during most of the day and during the night, letting her out while I was present to supervise.

This scheme received a set-back yesterday. Rachael tends to stay on a chair in the dining area whenever she is released from solitary confinement; I don’t think this was enjoyable for her but at least she is out with everyone. Whenever she gets off the cushion to venture about, Tucker hurries over to follow her. Last afternoon, Tucker was, for once, not doing anything offensive, though the new girl took umbrage with his presence nonetheless and launched herself at him. This was the first full-fledged battle in which Rachael engaged. There was fur flying everywhere. The new girl retreated to the top of the cat-tree, perhaps realizing that the heavier roly poly had the advantage on her. Despite the circumstances, I was a little proud of Tucker; he didn’t back away and in fact climbed the cat-tree to continue the fight. I wasn’t having that, though, and used the nylon tunnel as a harmless but effective prod to push Tucker down. As when Luther and the perma-cats went at it, I was surprised in this instance that there were no injuries, especially considering that no one has been able to cut Rachael’s claws for some time.

That settled Rachael’s situation for the time being. When I could coax her down to a level of the cat-tree from which I could pick her up, I deposited her in the back parlour, where she will stay for a while, until she calms herself. She continues to spray, though soaker-pads are absorbing some of it. There is something that she finds deeply disturbing about her new environment. Is it just the resident cats? It seems to be the boys only. Yesterday, before the combat with Tucker, she was on the dining table, viewing the world through the window. Tungsten didn’t know she was there and leaped up, inadvertently joining her. Rachael turned to look at the orange one, then returned to the window, untroubled. Tungsten thought about it, and got down again. Josie doesn’t cause Rachael any distress, either, so far as I can tell.

I hope to let Rachael out of the parlour when the boys are securely locked in the bedroom, but obviously that can’t be a permanent solution. When she is free, she tends to wet where she shouldn’t; but then, she does that when confined.

So I will wait her out, spend time with her and try to reassure her. And keep plenty of cleaning solution close to hand. 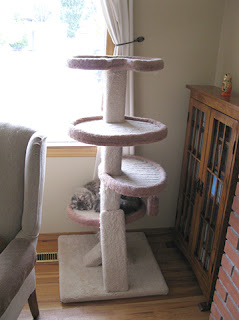