Getting to Know Rachael

My house-guest is Rachael, a long-haired female cat, a ‘dilute’ calico. She’s still adjusting to her new situation, and her new situation is still adjusting to her. She replaced Luther, who was having troubles in my house as a foster-cat because of his almost nonchalant attacks on my perma-cats. Other than that, Luther was a wonderful little fellow. He is now doing very well as an only cat in a new foster-home.

Rachael is not as adaptable as Luther. She had a difficult time using only the litter-box for her waste-disposal. She also scrapped with both my male cats, and then took after Josie. Tungsten is the only one she hasn’t yet fought with, though she looked at one point as if she might. It’s true that such rows are to be expected. But the mere presence of my boys seemed to cause Rachael anxiety, and since she was having litter-box problems, I thought it best to isolate them. So now, Rachael is kept by herself in the back parlour during the day and in the downstairs bathroom at night. I let her out while the other cats are confined for an hour at a time. This is practically the same situation as Luther endured. It’s far from ideal but it will have to do for now.

On the positive side, Rachael is now more controlled with regard to wetting. At one point, she was depositing waste in the litter-box, and then again outside. The Lethbridge PAW Society, for whom I am fostering this little cat, suggested two litter-boxes. As luck would have it, I have more litter-boxes than I have furniture, so I filled a second box with ‘Cat-Attract’ clay litter and the next time I checked on her, Rachael had used both. She continues to do so. More than once, she waited until I scooped the refuse from a box, then immediately used it. The conclusion I drew was that Rachael is particularly fastidious; her long fur is probably a concern to her around litter, and she doesn’t want to visit a litter-box that has been used already, at least until it is scooped. She may be adjusting that attitude, considering the amounts I find in the boxes now, but I think she will continue to need two boxes. If that’s what makes her happy - and clean - there’s no harm in it. 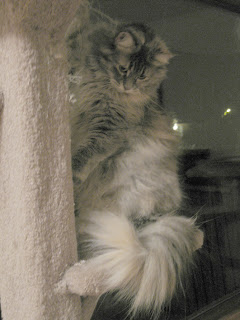 She has also stopped wetting elsewhere, for the most part. I had been using soaker pads to cover my furniture in the parlour where Rachael stayed. She wet on one, two, even three each day. Eventually, it was decided that the pads themselves were causing her to wet outside the box, since she did so nowhere else. With bated breath, I removed the coverings that shielded my furniture from possible cat-urination and left Rachael to her devices. She did not abuse my trust. She has continued to use only the litter-boxes.

Except for one or two instances. She wet in the bath-tub during the weekend, and around the toilet in the downstairs bathroom one night. One may think that she is at least getting closer to the proper articles for waste disposal, and that if I left the toilet seat up for her, perhaps I could do away with litter-boxes all together. But no, she still has some little way to go.

But what a nice animal Rachael is. She is friendly and fun, always wanting attention. She will rub up against me, arching her back, giving a strange creaking sound instead of a meow. She loves the face-rub and to have her sides rubbed vigorously. Like Luther, she will not sit still for attention but gets up, revolves, moves, bumps, then comes back, though late at night, she will lie quietly and enjoy a constant but gentle stroking on the head. She kneads easily, her little forepaws flexing all the time.

She’s playful, preferring string toys (or just string) and, when on a cat-tree, will flip herself upside down to get at it, kicking the underside of the platform above her in her excitement. She enjoys treats but doesn’t care for Fancy Feast, which I find odd. She likes Almo, but since it is not a complete soft-food, I am trying to introduce Fancy Feast gradually, though not without much success. I would like ultimately to get her into something such as Wellness or Blue Buffalo.

I don’t think Rachael was attended to in her previous home. The fact that she and her two cat roommates were returned to the PAW Society (from which they were initially adopted) because the owners were ‘downsizing’ their pet population (including two little dachshunds) indicates the level of attachment they had to their animals. Rachael has a tremendous number of mats in her fur, which will be trimmed this week, when she goes for dental work. She adores being combed, but I'm probably the first to treat her thus. She may have been let outside on a continual basis, where her unconventional pooping needs were unknown. She is very clingy at times, and I wonder if she received much attention at all.

These characteristics indicate a cat requiring a great deal of affection and time. Rachael, like Luther, may do best as an only cat, though unlike that tough little fighter, I think there are plenty of felines with whom Rachael could be friends. Hopefully, there is someone patient enough to give her the chance of a real home that she deserves. Her current situation with me is good but insufficient for a cat who enjoys human company so much, and after the apathy she undoubtedly received in her previous home, a foster-home - or better, a permanent one - where she can receive much more attention would work wonders with this cat. Maybe a new home is just a blog-reader away... 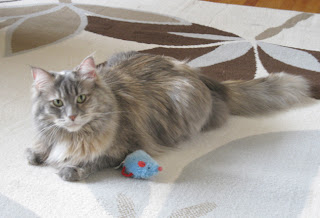