Bear-Bear continues to go for his blood tests each week, but the results are not encouraging. My long foster-cat is fighting a low red blood-cell count, which may be indicative of cancer, though in the first instance, he is being treated for a condition in which his own body is attacking its blood cells. There is no certainty that this is the matter with him, but it is treatable, while the cancer is not.

The prednisone that he is currently taking is not helping him, however. It may soon be complemented by another drug, which may, if successful, replace it. On the other hand, it's possible that the prednisone is  ineffective in its cream form, which is rubbed in his ear. A pill may be more potent. These are the options that are being considered.

For the moment, Bear-Bear continues to act well and healthy. He has a good appetite - when he meets with a food to his liking - and very much enjoys his pets and chin rubs. He will often come up to me while I am sitting writing, and want to jump onto my lap. There, he will relax to some attention until he decides, quite suddenly, that he has had enough. He feels chilly at times, I know, for he has discovered the vents through which the furnace forces hot air, and will take up a station on a cat-tree above them, when they are exuding warmth. Otherwise, he will usually be found on his heated cat-pad. In the picture below, the BB appears to be on some sort of life-support. He is, in fact, snoozing in comfort. 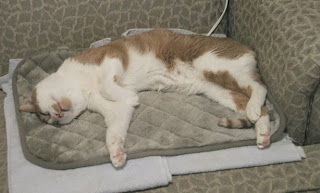 Bear-Bear frequently appears to have a melancholy air to him. His lazy gaze and drawn out speech make him seem rather downcast. But I think he is content much of the time. He isn't one for socializing with the other cats, but he greets me at the door each day when I come home from work, and I’m sure to rub his fuzzy head, to let him know I appreciate his presence. I do like him being in my home - his home. The veterinarian told me that if the BB has cancer, it would be optimistic to expect him to live another year. But in what time he has left, all his friends will make certain that he is happy.
Posted by John Bellen at 1:07 PM