Foster Cats in My Life

Having written about Cammie the other day, I thought more about the cats that I have fostered through the past six years. Certainly many people have fostered more; the individuals who are members of the rescue group with which I volunteer, the Lethbridge PAW Society, have sheltered hundreds of cats among them, adopting many, as will happen. It’s even been known to occur to me.

My first foster-cat came to stay with me when I had just two of my own. I did not keep a record of his arrival and departure, but it was some time before the middle of 2010. His name was Lincoln, a friendly, cheerful, all-black male. He was a talkative fellow, who sang and wailed about the apartment. Tungsten and Josie didn’t much care for him, the former hissing constantly in his direction and the latter trying to ignore him. That seemed to set the stage for future fosters. Lincoln did not stay with me for long. His good-nature appealed to a lady who was leaving Lethbridge soon; she and Lincoln liked each other and they went away together. 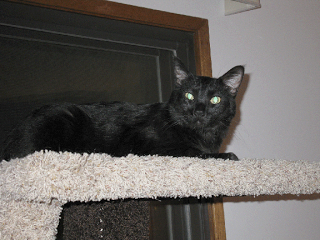 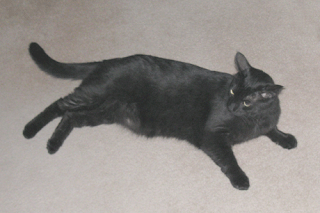 Next came a pair, Wixie and Mystery, also before the middle of 2010. I believe they came from a family who no longer wanted them. We never really knew why. Wixie was a big, solid grey-and-white girl, with a mask over the top half of her face. Mystery was a light-weight tortoise-shell female. The latter was easy-going and indifferent to other cats. Wixie decided that she wanted to be top-cat, and this did not it well with Tungsten. Wixie started to intimidate the orange one, who knew she was too small to defend her position physically. Josie had no problem with that and was involved in at least one whirling, fur-flying fight with the Masked Marvel. Fortunately for all concerned, these two fosters, who were quite loveable on their own merits, were adopted together. 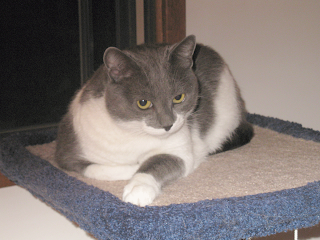 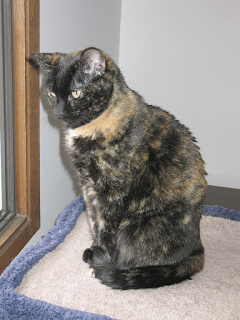 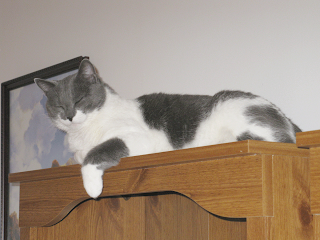 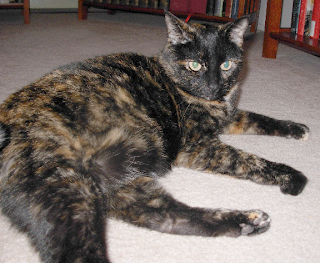 Renn came after that pair, in May, 2010. He had only one ‘n’ in his name at the time. Anyone who has read this blog for a while will be familiar with my big boy. He was in a foster-home where he was not really appreciated, though he was treated well. He was forced to re-locate after he bit the woman who was trying to clean his bum. To this day, he dislikes having his nether regions washed, and hates having his claws cut. I adopted him. He has become my friend, the first to come to bed with me when I retire for the night, and always eager when I start to run the bath-water. He joins me for movie-time and is a lover of chest-rubs. He’s my lazy dog. 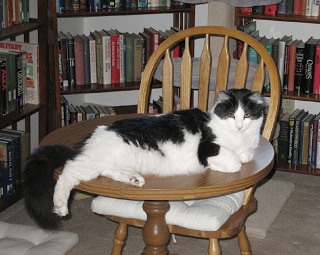 Then, Devon arrived in late August, 2010. He was found by a member of PAW; she glanced out her window and there he was, looking in. He definitely needed rescuing. After he was brought in, he threw up a stomach-full of wood chips, the cedar pieces used to make a decorative ground at the base of shrubs and trees. He had been so hungry he had eaten them. Contrary to some people’s thoughts, cats are not all natural survivors. Devon would not have lasted in the wild, even when the ‘wild’ was the back alleys of a small city. He was a mischievous cat, playing rough with mine, but still, just playing. He was adopted by a co-worker of mine, a woman who, with her husband, already had two long-established female cats. Devon was just as active with them, but has settled down very well and is a loved part of a family - which has grown even more: the couple rescued another cat, and he too now lives with them permanently. 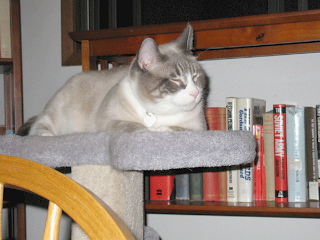 Such was the need for foster-homes that a certain roly poly sausage made his appearance in the apartment where I lived just hours after Devon left, in October, 2010. He was upset with his change of surroundings and wouldn’t eat, so he had to be force-fed. With a look of mild sorrow, Tucker accepted his unwanted nutrition until he started to eat again five days later. He’s rarely been without his appetite since, though he’s had plenty of other problems. I adopted him, too, as I couldn’t be without the no-necked little melon-head. 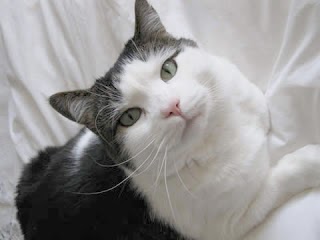 Luther stayed with me from May until September of 2012. He was a neat little fellow who attacked every cat he could get at. To this day, I don’t know if it was due to play or hostility. If play, then it was relentlessly rough; if hostility, then it was accompanied by no other signs, such as hissing or growling. He had to remain isolated from the others, which was no life for him. Happily, he was taken in by another family, where irony caught up with him. Guessing that he would not attack a kitten, PAW placed one with him when a tiny cat named Fortune was rescued. Sure enough, Luther not only didn’t assault the little guy, but they became friends, and were eventually adopted together. And the irony? Fortune is now larger than Luther, and likes playing more often and rougher than Luther cares for... 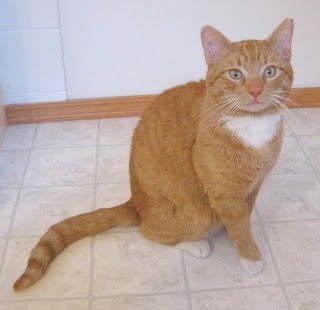 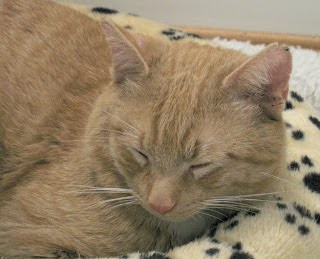 We enter more recent times with the advent of Rachael, in September, 2012. ‘Downsized’ by her family, she had difficulty adjusting to so many other cats with whom she was unfamiliar. A wonderful and beautiful creature, she was moved the following April to a household where she is the only cat and, under the care of his new foster-people, has made great strides. I remember her very soft voice and equally soft fur. 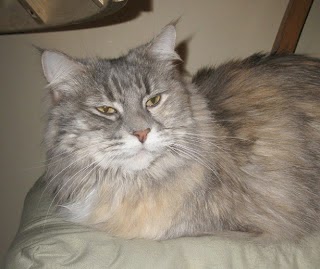 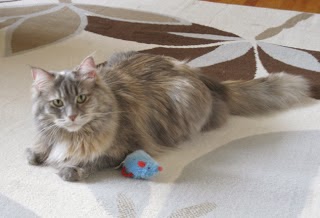 Then came Bear-Bear, very soon after Rachael left; a relatively new rescue, he was unwanted by the two people who had had him on trial-adoption for a month. And finally, Cammie came to stay, in July. 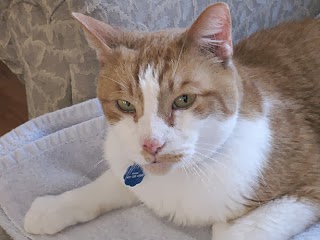 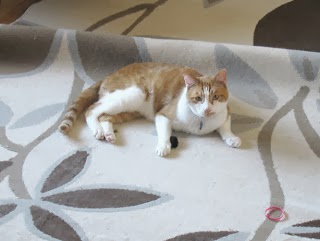 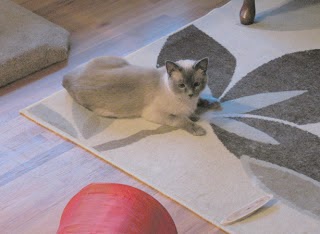 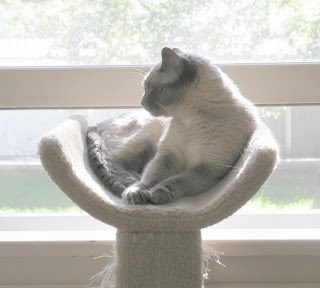 It’s interesting watching the cats in my care evolve. Luther didn’t change much, and I can’t say whether he would have. But he did with the companionship of Fortune. My first fosters were with me too briefly for me to see much of their characters. I realise, as I mentioned to someone who commented on another article I wrote, that there has usually been a point with my fosters up to which part of me wishes simply that they would go. They would be disruptive and I don’t think it will get better. I think many people have that feeling with guests, even though they may actually be welcome. But most pass that point - rather like the 'wall' that runners experience, up to which running is an ordeal, after which, even if it may still be hard work, it is much easier. And though the reaction of each foster to his new setting and his new roommates varies, he usually settles down.

As difficult as it sometimes is for me, coming into a new foster-home is much more troubling for the cat involved. He is often taken from a familiar environment, sometimes a safe one, always different, and presented with new cats, new humans and new rules. It’s no wonder that he adjusts only after a time. But adjust he does, just as he does again when he goes to a permanent home. Cats are versatile and adaptable, but I’d like each to be in a situation from which he would never have to adapt again. I’d like to see each in his own lasting and loving home.
Posted by John Bellen at 12:03 PM