More than a week ago, Renn went to the hospital to treat whatever was making him think he had to wet, when he really didn’t. When he came home the next day, he was much better. He did, however, bring home a cold. I am certain that he caught it at the hospital, where all the sick animals are. The cold expressed itself almost entirely in sneezing; long series of sneezes, in fact. But his appetite was good and he even played.

My big boy’s cold left him swiftly; where it went was into Kola.

First Kola developed a cough, a kind of choking bark that resembled somewhat an attempt to dislodge something in his throat. I was worried that he too might have to see a doctor, but this phase passed, and developed into a genuine cold.

When I came home yesterday and opened the parlour door to release my foster-cat, he did not leap out with a cry, jubilant at being free. He did not seem excited at all. He remained where he lay, on the heated towels of the parlour’s couch. I knew something was amiss then.

The floofy one started sneezing last night. Like Renn, his sneezes come in gaggles, one after the other. Unfortunately, unlike his roommate, Kola has a stuffed nose that forces him to breathe through his mouth. He cannot smell, so he will not eat. I’m not sure if he has drunk from his water-bowl, either; he certainly has not asked me to run the bathroom tap for him, lately one of his favourite pastimes. 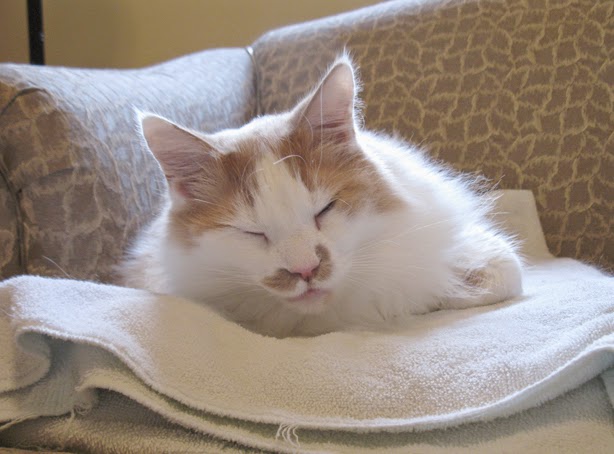 This is a more serious illness than Renn’s, and I will be watching Kola carefully over the weekend, a long one due to Thanksgiving Day on Monday. I may have to apply the syringe to Kola, just to put some food into him. I hope that won’t be necessary, as it is unpleasant for any cat, even if it is done expertly, and since this would be my first attempt at feeding the floofy one, my actions would not qualify as expert.

I am not otherwise too concerned, since I am sure this is a cold, and it will pass. But how quickly, I cannot say. The failure to eat and drink is my greatest fear. In any case, Kola will be spending the next day or two close to his parlour, no doubt on his warm towels. He doesn’t seem to believe in the adage of misery loving company, so I will let him be, to rest and recover. 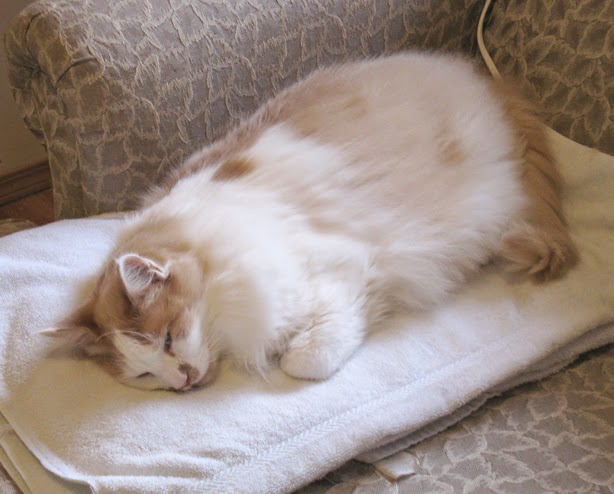