The Effect of Starvation

I would like to feed all my cats only soft-food, good quality tinned products. That’s not going to happen. Some will simply not eat the best that I can provide (Cammie). Some eat too little soft-food (Tungsten). Some eat soft-food today but not tomorrow, but maybe the next (Renn). I have attempted to give them different brands, different flavours. If I had fed them only soft-food from the moment they had come to me, perhaps I would have succeeded in keeping them on such a diet. However, that was not the case, so I do now what I can.

And what I can do is try another experiment. When I get home each day from work, I feed the beasts a soft-food dinner. I give them a similar meal, which they know as ‘snack’ about eight o’clock. In the interval, they are free to nibble on the hard-food. I have now removed this option. It has resulted in a better and fuller consumption of the soft-food I give them at snack-time. I am only into the third day of the experiment, but I like what I see. I may extend the experiment to other times.

But what a fuss it has created. The period between dinner and snack-time is now filled with prowling carnivores seeking a kill with which to slake their hunger; cringing mendicants grovelling at my feet, begging for scraps; vultures swirling about looking for scant pickings in a land of immortals, and self-pitying whiners who bewail the skeletal remains of once sleek and stout bodies. You would think these cats were Oliver Twist in the workhouse.

And when, after the snacks have been disbursed, after time has been given for digestion, I put the hard-food bowls back down, they have the gravitational pull of red giants on tiny asteroids. Last night, I observed something I had never observed before. Have you ever seen pictures of a family of cats, all eating at once, all from bowls arranged in a close-set line? Perhaps that is your family. It’s not mine. I feed my animals practically in separate rooms. But last evening, Tucker and Renn were too hungry to wait, too hungry to dislike one another’s proximity. 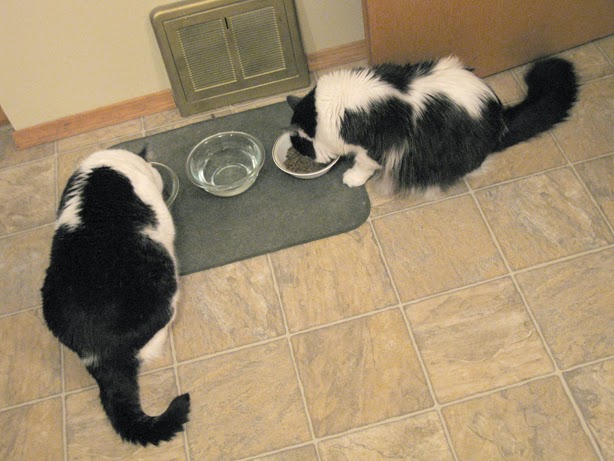 You can see how I am abusing the cats by the gaunt and boney form that Tucker has become. He’s virtually a stick, and I am being made to feel appropriately bad for it. But starvation loves company - and company loves its food.
Posted by John Bellen at 6:29 AM