I think the veterinary hospital may have given me the wrong cat when I picked up Renn. Sure, he is in many ways like my Renn, but he is, well, even more like my Renn than my Renn was.

He is extra affectionate: he has a new routine of crawling up to me after I’ve gotten into bed but before I turn out the light. He’ll purr in his rough way and bump his head against my hand. Also, he greeted me at the door when I came home yesterday, which he hasn’t done in a long time.

There is the lack of vomit: that has ceased entirely. Josie has thrown up a meal or two, Tucker has returned a small portion of dinner now and then, Cammie belches in her eerie and disturbing way, and even Tungsten upchucked last night. But Renn’s stomach is stable.

Then there is the eating. He is eating almost all of the soft-food I put down before him, even at breakfast, which has never been a meal he’s greatly desired. He actually seems eager to receive his food now.

Who is this animal? Where is my sulky big boy?

Considering the veterinarian did very little for him, I can’t determine the cause of this change. He received a small dose of Metacam to relieve any possible inflammation. Could that inflammation have been causing distress for so long? Was he getting better even as I took him to the hospital, and this is the culmination?

Whatever the cause, I like it. Renn is even taking his syringe feeding of Recovery better than previously, and isn’t as mopey afterward. That feeding won’t last much longer. It will be replaced by a weekly treatment for hairballs. I am not entirely unconvinced that a hairball resulted in all this trouble; perhaps it caused an irritation in his bowels.

I am ready if the other Renn returns, as he may; for now, I enjoy watching the new, healthier, happier Renn eat his soft-food. I haven’t seen this fellow for a while. I hope he stays. 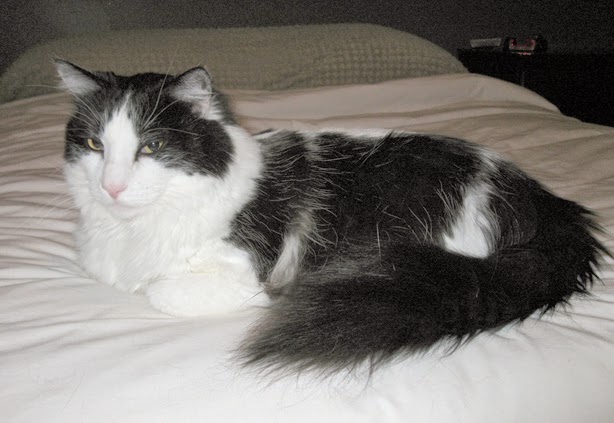