Cammie and the Christmas Tree

My Christmas tree is up and decorated. This is Kola’s first Christmas with me. As much as I like him, I hope it’s his last, as well; that cat would be such a good choice for adoption. Anyway, I was worried about what he might do to a Christmas tree. As it turns out, he was mildly curious about it, but only briefly. After that, he appeared uninterested in it.

The same cannot be said for Cammie. My Siamese princess was with me during last year’s Yuletide and, so far as I can recall, did not cause me problems with my tree. This year, however, she has taken to attempting to eat the ‘needles’.

Mine is a fake tree, and the needles are of soft plastic. To be honest, I don’t think she can eat many of them. They are too short and too strongly fastened onto the tree; she can’t get a good grip on them. But she tries, and will sometimes gnaw on a whole branch. The little needles do fall off from time to time, so she may get those.

I don’t believe the needles will do her damage if they are consumed. They will probably go right through her. But I don’t want to take chances, so I may have to put the tree away when I am absent and bring it out again later. I hope to get Cammie used to its presence; she doesn’t nibble at it all the time even when she can. So it’s hard to gauge her fascination with it.

But I was pleased to note an indication of how far that cat has come in her trust of people. I had to move her along when I caught her eating the tree. She knows full well when I want her out of an area and eventually she does go, grumbling and sometimes hissing. She did that in this case. Then, not ten minutes later, she was up on my lap at the table, purring away. She stayed there for half an hour. Being scolded is one thing; a warm lap and a petting session is quite another. 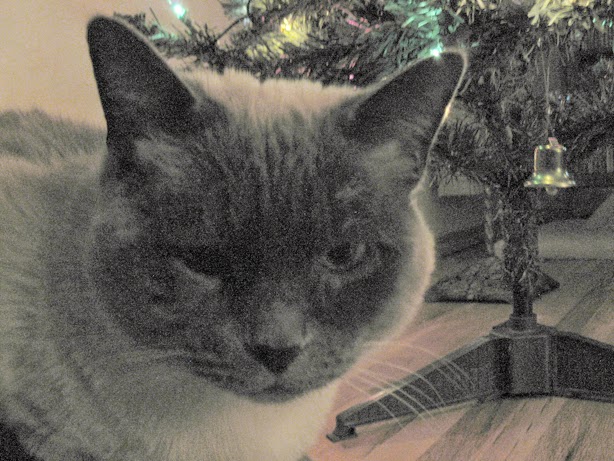