A River for Tungsten

This weekend saw the start of Tungsten’s subcutaneous fluid treatment. It went well technically, but I can’t say that I enjoyed it. I had to stick a needle into my tiny cat. This is part of her treatment for kidney failure, of which she is in the second stage. 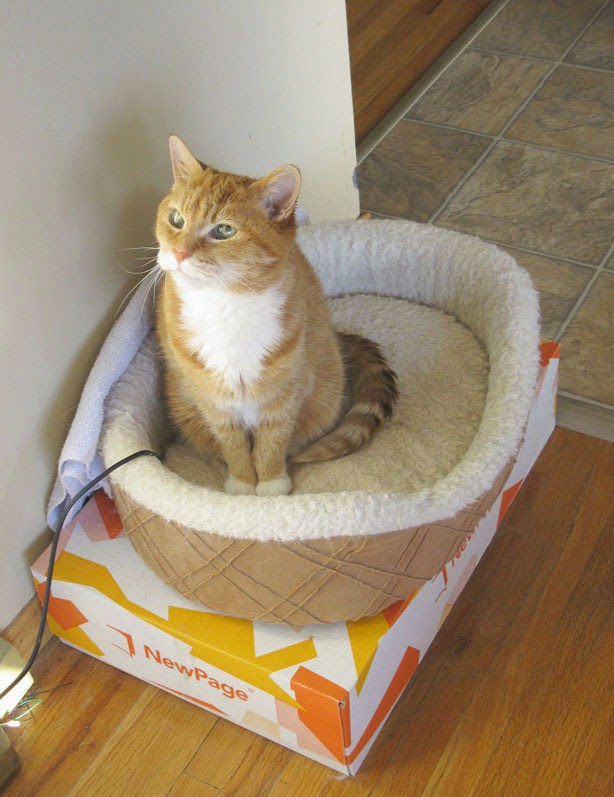 I was shown how to perform this necessary task by one of the executive board members of the PAW Society, the cat-rescue group of which I am part. I ask indebted to her for her assistance, without which I couldn’t do this. That would have been fine with Tungsten, I’m sure. 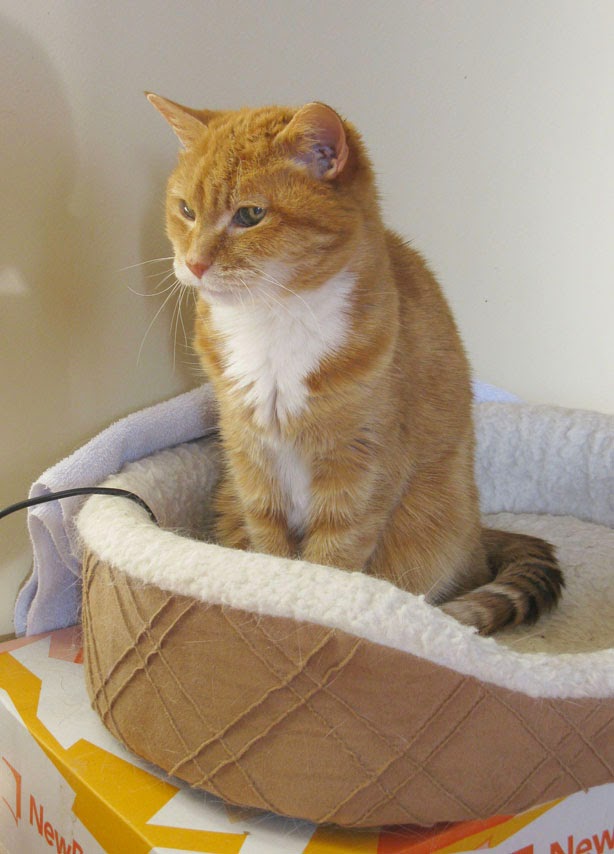 The process is familiar to a number of readers, I’m certain, but for those who are not acquainted with it, I will show you the components. There is the solution, which is injected into the subject (i.e. Tungsten). Don’t worry, not all of this bag goes into her at once. In fact, it is a small portion that is used each time, just forty millilitres. But it represents a small river of life.

Then there is the syringe. This I fill with the aforementioned forty millilitres of solution. It looks like a terribly large instrument, but it is not indicative of the needle that is used. 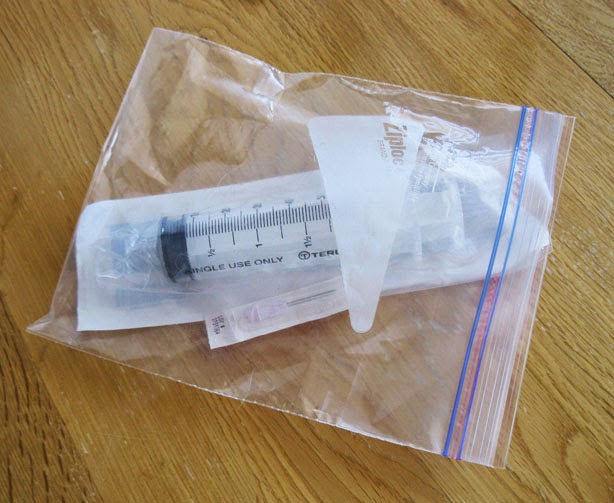 This is the needle in question. It’s large enough, so far as I’m concerned. It comes connected to a very thin tube, the far end of which is attached to the nozzle of the syringe. The tube brings the fluid from the syringe, when the latter’s plunger is depressed, to the needle’s tip. The needle is then inserted into a fold in Tungsten’s skin. Fortunately, she has loose skin. The needle’s insertion caused a little ‘meow’ to escape the orange one yesterday. I felt dreadful about puncturing her, and will each time I must do it. However, it is literally for her own good, and will help her to live longer than she would without the process, and to live well. 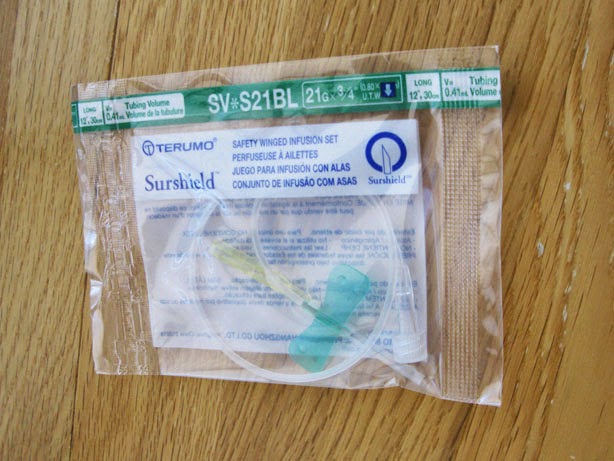 All of these items need to be kept sterile. For that I will be purchasing some rubbing alcohol. I also tried some ‘kidney diet’ food. This did not prove a success. As with almost every type of nutrition a veterinarian suggests, my cat did not like it. I think the manufacturers of specialty food must make a profit from people buying their products for the first time - because I doubt that many buy it a second. 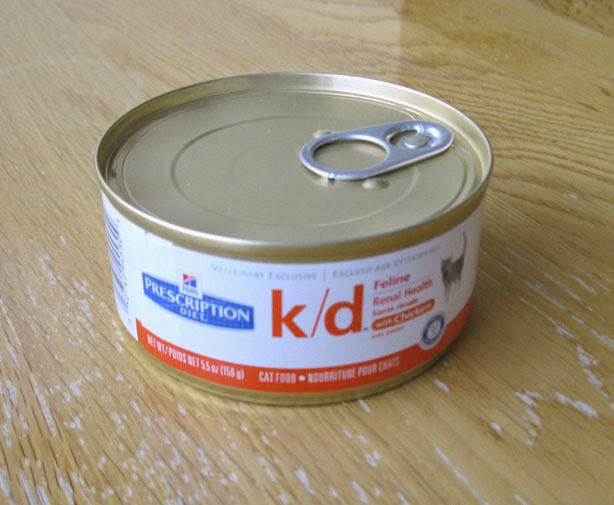 This is the amount of food that I had scooped from one tin after almost a week of attempting to get my top-cat to eat it. And of this amount, she barely ate a third each time. As other bloggers have suggested - as the veterinarian did, as well - a senior’s diet may have to suffice. For my part, I rejoice when my orange one eats any amount of food. She is not a big eater. 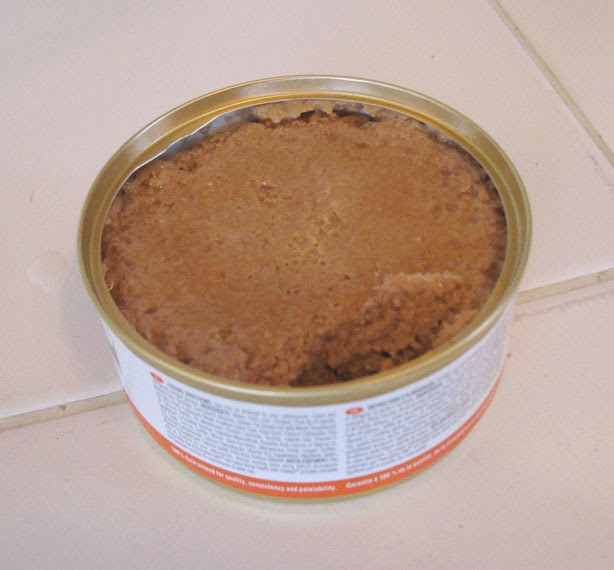 I will also be purchasing a supplement which will bind with the toxins in her body and carry them to their doom in the litter-box. This is another substance that is supposed to be taken with her meals. Flavourless and odourless, it’s meant to be sprinkled on her regular food. This does not sound promising; I know of nothing that is flavourless or odourless to a cat. However, I have my reserve plan of dissolving it - at least partially - in water and injecting it with Tungsten’s usual ration of liquid - which will be continued - into her mouth.

So my littlest friend embarks on a new phase of her life. I don’t doubt that this will make her feel better, but the initial stages, the delivery of the fluids necessary to achieve this goal, makes me feel worse. I hope I become as accustomed to it as I think Tungsten will. 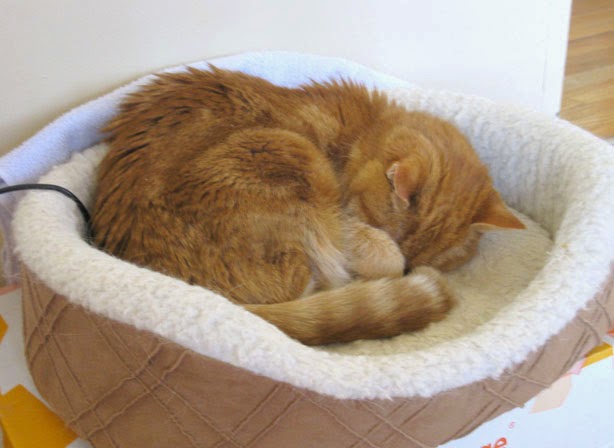