Tungsten at the Gate

Tungsten is in the hospital at the moment. Last week was a bad one for her. She began throwing up, one day vomiting three times, twice each instance. Her stomach was empty and wouldn’t keep anything down. The subcutaneous fluids would give her water but she would starve unless I could put nutrition into her.

I called the veterinarian and she suggested a simple antacid, in this case Pepcid AC, would help. Indeed it did. But Tungsten was showing no interest in food, so I had to use a syringe to feed her Recovery, a brand for convalescing cats, and those who are not taking in enough nutrition. I thought things were stable, if not improving.

Yesterday, however, the orange one took a turn for the worse. She was very weak and lethargic. Though she did express an interest in drinking some water in the morning, she quickly reverted to an apathetic state. As well, her breathing became laboured, with a puffing sound between inhalation and exhalation. I thought she was dying.

I took her to the hospital; though it was closed, it will open for emergencies. Tungsten has lost another half-pound in weight, and she was very dehydrated. I was clearly not giving her either enough food or water. She was put on intravenous fluids, and kept in the hospital over-night. She is there right now.

I will be giving her subcutaneous fluids every day now, which should keep her hydrated. But unless I can stimulate her appetite, I won’t be able to get enough food into her to keep her going. I will be trying a probiotic called Azodyl. This has helped another senior cat of whom I know who also has kidney problems. If this does not work, however, Tungsten may be facing an irreversible fate. 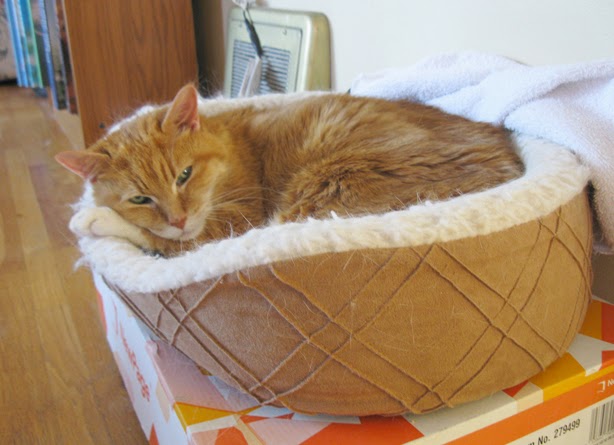