Tucker and Kola: Together Again

Tucker dislikes Kola. I don’t know why, but I have my suspicions. I think, whether consciously or otherwise, the roly poly one feels the need to emphasise the Floof King’s subservience. It’s a struggle for last place, which is rather pathetic, but that’s Tucker.

I’ve written about this before, but lately there has been a change in their relationship. Tucker still watches Kola like a hawk - a long, heavy, tubular hawk. Now and then, he still chases my foster-cat. Because the opportunity exists only when I am present (due to Kola being shut up in the parlour when I am asleep or absent for long periods), I am able to break up most fights before they start. Thus, I don’t know exactly what would happen; it may be no more than a brief welter of fisticuffs, though I did run up the stairs from the basement one day upon hearing a melée, to find a tuft of fluffy orange fur in Tucker’s mouth. He was hurriedly trying to eat the evidence of his transgression. 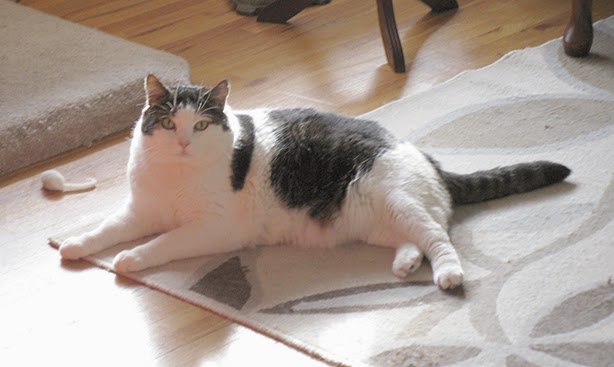 Lately, however, Tucker has been coming into the parlour when the door is open. I am home and he is free to come and go, barring there is no violence. To my surprise, he has been slipping, very timidly, into the room even while Kola is in it, to drink from a small ceramic bowl in which Kola’s water is placed. (Kola prefers the big glass bowl in the dining area but I am out of thick glass bowls to distribute; Josie likes aluminum; Tucker will drink from the aluminum bowl when the ceramic one is not available; everything about cats is a complicated affair.) 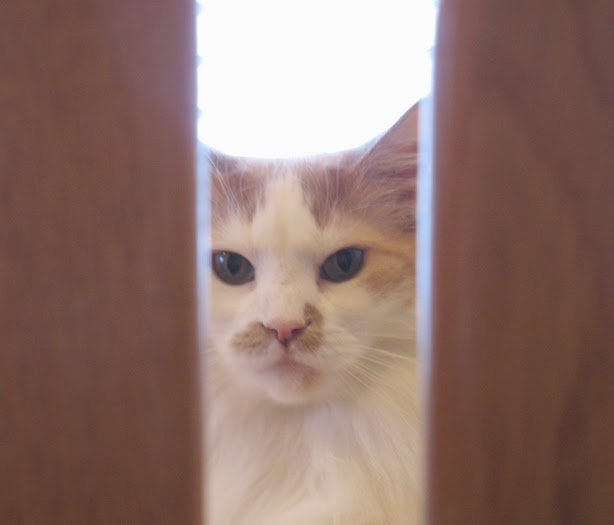 I don’t believe that Tucker is doing this simply to invade Kola’s space. He will drink from the little bowl even when Kola is elsewhere. And there is an identical bowl on the floor of the bathroom now (because Tungsten, when she will lap water from a dish, prefers ceramic to anything else.) Tucker will sneak in (though he has no reason to resort to sneaking; that’s how timid he is) and drink from there, too. Part of it is, therefore, the urge to have the taste of water from fired clay. (He doesn’t phrase it like that, though.)

Part of it is also, I believe, a genuine progression in his attitude toward Kola. I will be at the computer, which is in the parlour, and Kola will be sleeping in his cardboard box. That is usually placed near the doorway. Tucker will walk in, skirt around Kola as much as he can, and continue to the water-bowl. He will often look at Kola as he goes past, like a tubby little Brooklyn greaser eyeing the new kid who’s moved onto his turf. The Floof King, for his part, will admirably react with little more than one of his rolling, throaty grunts. As well, Tucker will enter the parlour just to snooze on the ottoman. He used to do this all the time before Kola arrived; whenever I was on the computer, in fact. 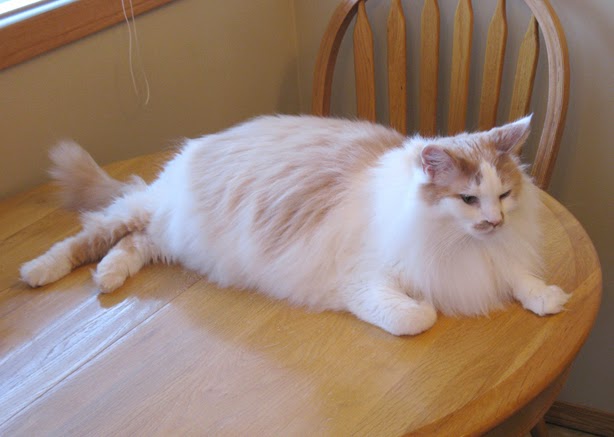 I am encouraging Tucker in these endeavours. As long as he behaves himself, I don’t want him to feel excluded from any part of the house, and I want Kola to feel safe with any of the other cats, as long as he is given reason to feel safe. Tucker, I realise, is reluctant to be physically near Kola because of my reaction to his attacks; (‘attack’ is too strong a word in connotation; its denotation, however, is accurate.) He associates proximity with chastisement. He isn’t quite clever enough to reason that I become angry only when he uses violence. After all, the roly poly one still hasn’t figured out the purpose of the flight of two steps I placed at the bottom of my bed a couple of years ago. 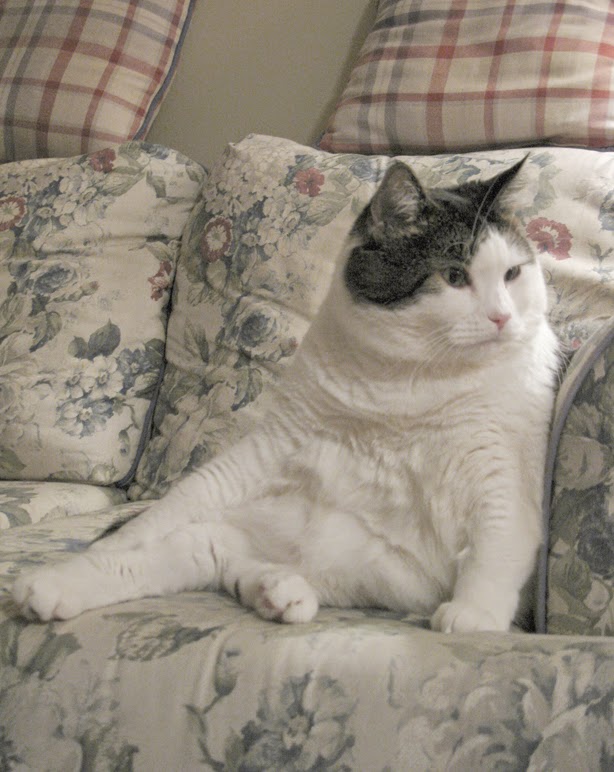 If Tucker continues to exercise his restraint, and Kola has the courage to keep calm in his presence, things should be much improved in the household.

Oh, and there is one more factor involved. A few days ago, I had occasion to clean Tucker’s bum. After taking him into the bathroom, applying a warm, wet cloth and then drying the area, no part of which Tucker enjoyed, I opened up the door to release him. The first cat he encountered was Kola.

Tucker flung himself upon the unsuspecting Kola and there was a real fracas as the sausage briefly took out his disapproval of my actions on his unfortunate roommate.

My fault, that time. 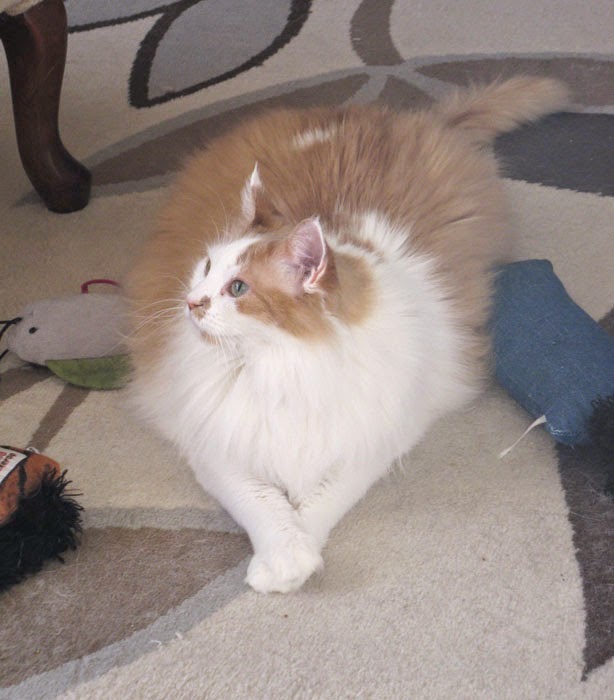