The Floof King Expands His World

Kola has grown in confidence since he has come to stay with me. He trusts more. One sign of this is his behaviour toward me while being petted. It used to be that after a few minutes, he would signify that he’d had enough by making as though to nip me. He never made contact, but it was his way of demonstrating that he was done. Now, he doesn’t seem to reach that point. He knows that I won’t hurt him. He will learn that very readily with prospective adopters, too.

Another feature of his trust is his peregrinations about the house. Upstairs, downstairs, in the human’s chamber, literally, is how he wanders. As a consequence, he has found certain spots that he enjoys inhabiting more than others. Some are established, such as his box. All cats seem to love boxes and enclosed spaces, to varying degrees, but the Floof King loves them more than any other animal in my household.

The box currently in the parlour is a sturdy container used originally for transporting soft and fragile raspberries. It can stand pressure, which is good, because Kola is bigger than the box and would have burst or squashed a lesser container. 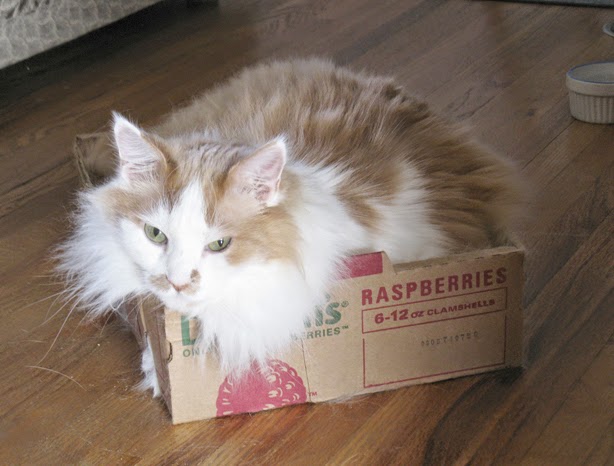 But he has found new places, as well, which speaks to his confidence in exploring and risking admonition, either from me or from the other beasts. Here he is relaxing on the dining table. Or he may have fallen from a great height and is dying. I can’t tell which. But in either case, he looks comfortable on that hard surface. I call this photograph 'The Motion has been Tabled'. Sorry. And yes, I do clean it off afterward. I clean my table before meals, anyway; one never knows which feline extremity was being cleaned there in my absence. 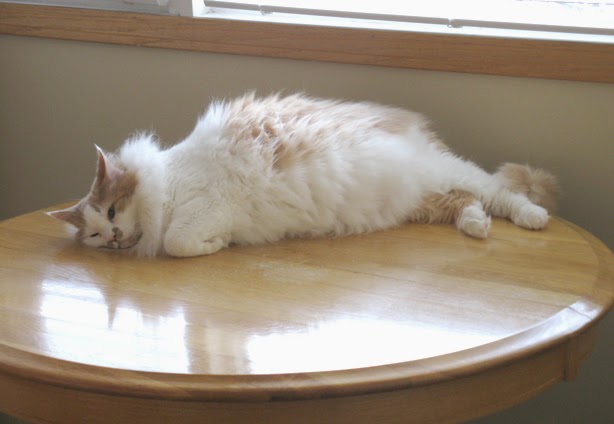 And then there are the cat-beds. Kola had discovered one of the sitting room beds some time ago. It is a popular one, which he shares with Cammie and Josie in turn. But its twin is usually the warm home to Tungsten, the household top-cat. Kola, I think, understands this but his realization that this bed, too, is heated, and just the right size for his voluminous fur to overflow, leads him to fill it when Tungsten is otherwise occupied. This does not sit well with the orange one when the bed’s unavailability is revealed. 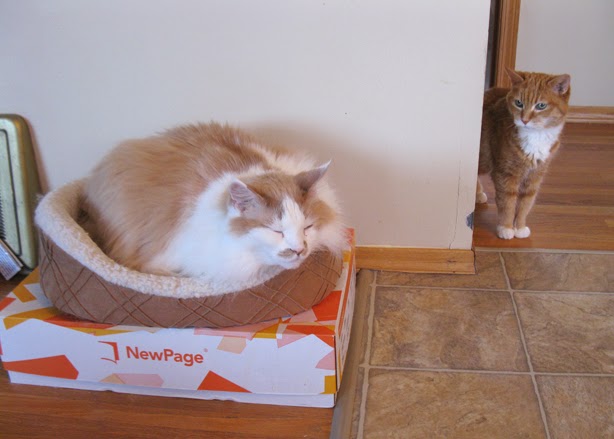 Even so, Kola is usually good-natured about abandoning the bed to her leader. After all, he has a hard, sharp-cornered box in which to recline.

So Kola’s explorations continue to expand both his knowledge and his self-esteem. An indoor cat’s world is, by its nature, restricted, so I dislike seeing that that world itself may include forbidden zones. The more a cat journeys into unknown parts, the more he adds to his little universe, and the more enjoyment he brings to his life.

Though I really don’t see the fun in lying in a box... 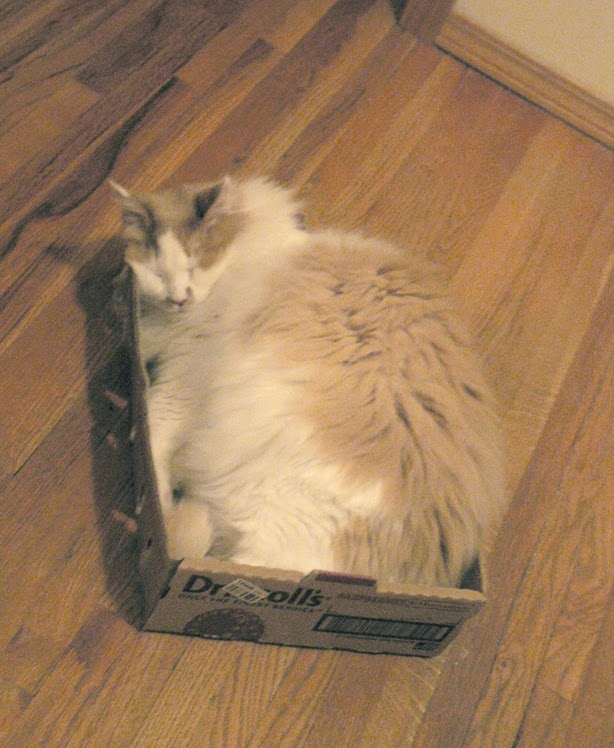