Food on the Brain

I have always tried to be aware of what I feed the beasts in terms of nutrition. It’s not easy finding the best food, and with Tucker now a diabetic, it seems to have become even more difficult. There are theories and beliefs everywhere. For instance, some people will advocate giving no soft-food to cats, while others assert that it is perfectly acceptable. Often, the conflicting reports - and on the other extreme, those that are not informative enough - reflect the inconsistencies that one finds in discussions of human food. Every week, a new report is published about how this substance is bad for a person, when the previous week, it was good. God forbid if you go on-line to research the topic, because everything on there has some source to support its theory.

When I brought Tucker home from the veterinary hospital subsequent to his diagnosis, I brought with us some tinned and bagged diabetic food. The tinned I would not have bought if I had known it comprised chunks in a sauce. My cats have never eaten that sort of product. They lick off the gravy and leave the dried bits of meat that no one else will eat. It also contained gluten. For me, gluten is not necessarily bad. But I like to use what I pretend is my common sense: cats are carnivores. They are not much removed physiologically from wild cats. They eat mice, fish, birds. They rarely raid bakeries and patisseries for bread, rolls, turn-overs and doughnuts. My guess is that if grain-products are not on their natural menu, there is no need for them to be in what I feed them.

As well, from what I understand, some items, such as corn, are indigestible to cats, and are used by cat-food producers as filler. One article I’ve tried, named Spot’s Stew, may be very good but it has peas, carrots and, I think, green beans. I fed that to one of mine, Renn, I think, in the past. He ate some of it, but deftly cut out the vegetables and left them to the side. To make things clear to me, he squished the pea flat. I could almost have heard him telling me, “I’m not some tree-hugging, nature-communing hippie who sits back, looks at the stars and listens to old Valdy records while eating tofu and granola - I want meat.” I informed him that I happened to like Valdy.

But due to Tucker's current condition, I have been a bit more diligent in looking at ingredients and their composition. A fellow member of the PAW Society here in Lethbridge, aside from giving me information based on her own experiences, sent me a link to a site in which a veterinary gives a formula for calculating weight of carbohydrates in cat-food, and the percentages of calories obtained from sources  (http://www.catinfo.org/?link=cannedfoods#Calculating__Percentage_of_Carbohydrates:). Aside from keeping down the amount of gluten and indigestible items in their bowls, I understand that a goal should be reducing carbohydrates so that, ideally, less than ten per cent of their calories comes from that source.

I decided to put that test to some of the varieties of food I’ve been giving the beasts. Let me write first and foremost that a diet comprising only soft-food is not practical in my household. The beasts simply will not eat enough of it. I’ve attempted it before. And I want to find a hard-food that all the cats will like and eat.

Let’s start with what I brought home from the veterinary hospital: Royal Canin Diabetic hard food. All the cats enjoy eating it, and I have mixed it with their regular hard-food to create something that looks like a chocolate and peanut butter dessert. 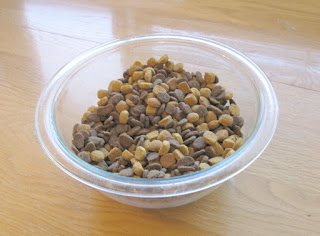 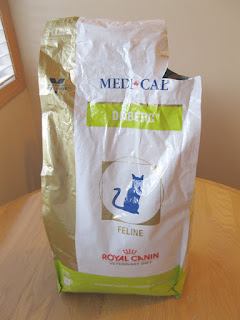 The first item in the list of ingredients is chicken meal. One site (http://blueseal.com/tech-talks/chicken-and-chicken-meal-what-are-the-differences/) may be biased as it is a product's own website, but the description of chicken versus chicken meal is verifiable, and suggests that chicken meal is good. The ingredients that follow, however, left me uneasy: corn meal gluten, barley, wheat gluten, tapioca, powdered cellulose… Unless Tucker has developed a taste for beer, I can’t see that barley would do him good. The contents and the percentage of calories derived from carbohydrates made me think I should try a different food. 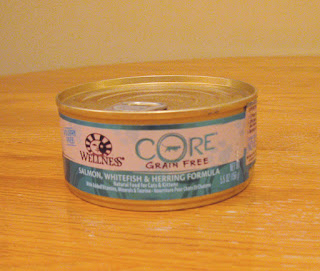 Wellness Core soft-food comes in a limited variety of flavours, at least here in my town, and Tucker is luke-warm about eating it. But its percentages are good.
44%    protein
54%    fat
2%     carbohydrate 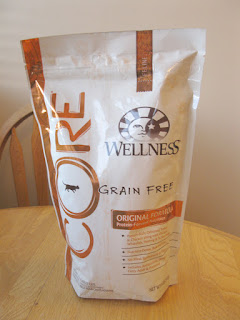 Its more solid older brother, Wellness Core hard-food, produces twice the recommended amount of carbohydrate-created calories - but then hard-food will always be higher in that regard than soft:
40%    protein
39%    fat
20%    carbohydrate 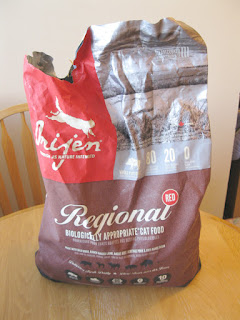 I have been feeding the beasts Orijen hard-food for a couple of years now. The first non-meat-related ingredient in its list comes in fourteenth place - and that is lentil, which I believe is high in both calories and protein. As well, the food is produced here in Alberta. The percentage of carbohydrate-created calories is the lowest I’ve found in a hard-food.
38%    protein
46%    fat
16%    carbohydrate 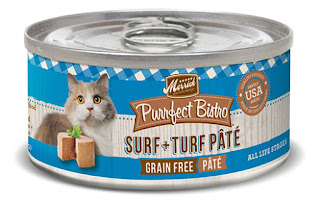 What startled me was the source of calories in Merrick tinned food. I have been buying this product thinking that it was one of the best, and indeed it may be, but I don’t know that I will continue to purchase it as often after my calculations. This breakdown is for the flavour called surf + turf.
23%    protein
16.5% fat
61%    carbohydrate 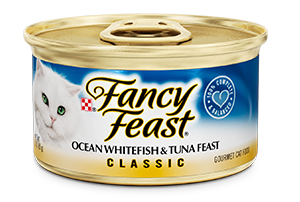 And finally, our old friend, Fancy Feast. These percentages are for Cammie’s favourite flavour, ocean whitefish. At least in terms of numbers, it is better than Merrick, and though there are many other factors to consider, it certainly gave me pause to think.
41%    protein
16%    fat
43.5% carbohydrate

It may be that my calculations are in error. I went over them several times, especially with the Merrick. But I think they are relatively representative, if not absolutely. In the end, it comes down to one thing, and one thing only: what the cats will eat. I can buy the best food in the world, whether cheap or expensive, soft or hard, tinned, bagged or sealed in ancient Egyptian sarcophagi, and it matters not a whit if the animal won’t eat it. Cammie may not know best, but she and her kind have the last word. If they eat it, they’ll eat it; if they don’t, buy the best that they will.