The Lion and the Lamb

It’s interesting that a cat’s progress is often two steps forward and one back. Cammie is a good example of this. She will do something that she has not done before; it will surprise and delight me - but she won’t do it again for a long time, and until then, she will actively fight against doing it.

I hope that won’t be the case in this instance. The princess has been on my lap frequently. That is an established thing now. The steps are definitely forward in that respect. A while ago, she started jumping onto my lap even while I was on the couch, which was another progression. But as you can see from the first couple of photographs, she was wary of any other cat approaching. 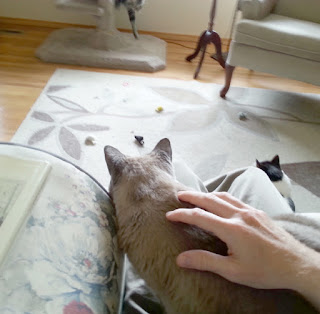 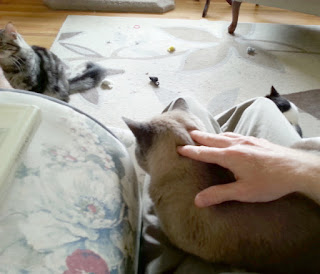 Then, yesterday, she did something unprecedented. She leaped up onto the couch and settled onto my lap while two other cats were also on the couch. Tucker did not pose a great problem for her, though having him so near while Cammie relaxed was a victory. Even more so was that Tucker didn’t swat at Cammie while she was next to him. That was a real danger, as the roly poly one doesn’t care for cats being too close to him, though his views in this regard are less obvious than Cammie’s. But both stayed put. 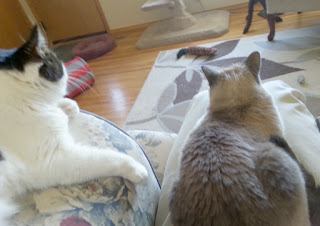 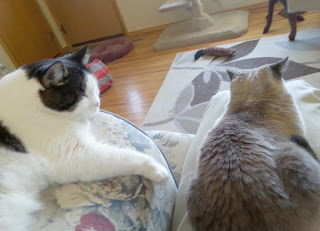 But Noah was at the far end of the couch - which isn’t that far away. Even with space between them, Cammie usually becomes annoyed, angry, and absent, in that rapid order, if another cat - especially the boy - also claims a spot on the couch. Not this time. Everyone became comfortable and relaxed. Eyes closed. At one point, Cammie even dozed. 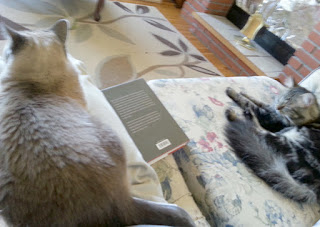 I had things to do, but this was too good a situation to ruin, so I stayed still for as long as the princess did. After about twenty-five minutes, the party broke up, Cammie dropping to the floor first.

Perhaps this will be a unique instance, but I don’t think so. It may not happen again for a while, but I am confident that it will repeat itself at some point. My cats may never become friends, but if the lion and the lamb can lie together, I will be happy.
Posted by John Bellen at 6:46 AM