Though Undercover Mouse is popular with some of my beasts, there are other toys with which they like to play. And with respect to Noah, there are some things with which he likes to play that aren’t even toys. Take, for instance, a balled up paper receipt. 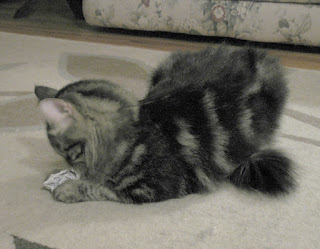 This is him grappling with it initially. Sometimes, I will throw it; other times, I will simply toss it to him. Noah being Noah, he will not infrequently simply try to steal it. 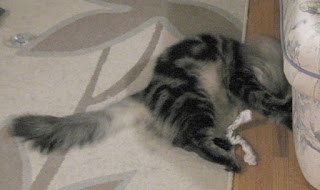 Then, it’s out to the kitchen, where, no surprise, the ball get stuck under more furniture. But the boy’s energy is such that he can usually work it out into the open again. The linoleum on this floor is better suited for that than a rug that interferes in the sitting room. 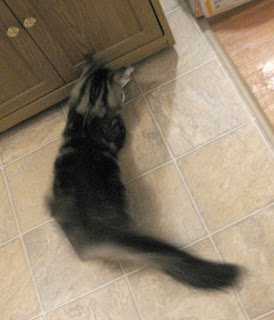 And it’s always fun to use the hammock as a springboard for attack. It also moves more easily than a couch or micro-wave oven stand, so it can end up travelling all over the house. 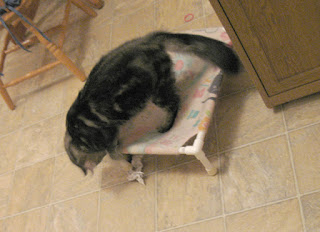 But really, what’s the fun of catching your prey when the delight is in the chase? So, if the ball goes up on top, Noah will go down below. 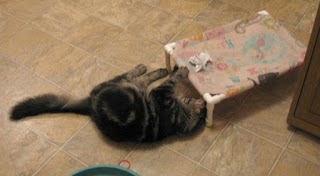 Now, one would think that a crushed wad of paper is a fairly cheap toy. Intrinsically, I imagine, it costs about a penny to make and print. I actually got it for free. But what it cost to get it was more than $75 in cat-food. So that makes this ball of paper probably the most expensive cat-toy in the household. And the boy will simply tear it up and throw it away later. Not to worry, though, more cat-food will need to be purchased, and more receipts accepted. The fun will continue.
Posted by John Bellen at 11:46 AM