Villainous When I Need to Be

In my drive to make Tucker well, I had to play the villain once more and take him to the veterinary on Friday.

I wanted to show the doctor how I was injecting the roly poly so that she could tell me if I were doing something wrong. I fed Tucker beforehand and he was ready for his medicine. It turns out that I am performing the task correctly, though getting him to co-operate in the examining room was difficult. Now, however, he allows me to inject him on either side of his tubular body. That will save me from poking holes constantly in one flank. 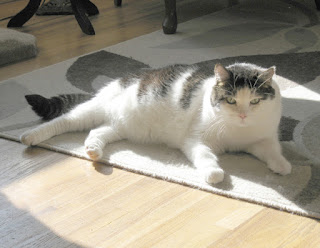 I was generously given a glucometer by a fellow cat-fancier and, after trying and failing to take a blood sample from Tucker the night before the veterinary visit, I had the doctor show me once more how to do it properly. I am more confident about it now. This will be invaluable in the process known as ‘curves’, which will be used to measure Tucker’s glucose levels over a whole day. The information can then be relayed to the doctor via email. More needle-tops for the insulin ‘pen’ and more needles for poking my poor beast’s ear were obtained.

As well, I discussed buying insulin elsewhere than the animal hospital. Pharmacies have provided owners of diabetic cats with less expensive but otherwise identical medicine in the past. My veterinary had no problem with me finding an alternate, cheaper and more convenient source for the substance. This may save me as much as half the cost.

I also inquired more about the emergency use of corn syrup. A fellow member of the rescue-group to which I belong told me about it, and I will be ready to apply it if necessary; I hope the occasion will never arise. The doctor did not favour using methyl-B12 on Tucker yet; she prefers to use it on older animals, and the roly poly is barely middle-aged and, but for the diabetes, in very good shape. 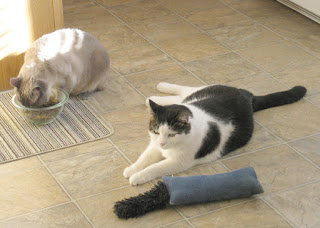 The most immediate effect of the visit was to double Tucker’s insulin dose to two units, twice a day. His glucose number had gone down somewhat from the previous reading, but it was just a small dent in the armour with which diabetes girds itself. So now, we have increased the pressure of our blows, and we’ll see how it likes that.

I wish I could write that Tucker is doing his part. Unfortunately, over the weekend, he decided that he was rather luke-warm about the food he previous ate with zest. This is bothersome at the best of times, as I like to see the cats eating well. But when a cat must eat to receive his medicine, it is doubly troublous. But Tucker is eating; it simply takes more time and effort to determine what he will eat. With luck, this will be just another phase, like all the other micro-changes in diet to which he and the others periodically subject themselves. In the meantime, I have an array of brands and flavours to feed the sausage.

When it comes to making him hale and healthy - as much as possible, at any rate - Tucker will find me as devious as any villain from an old-time melodrama -  but without the waxed moustache and cape. 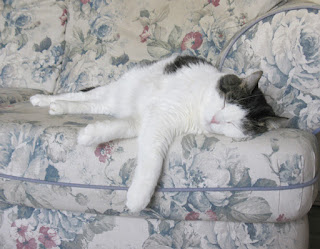