Josie in the Foreground

Josie is my background cat. I hate to think of her that way, but she is unobtrusive, despite her size. She doesn’t invade one’s space, she tries to stay out of the way. Now and then, she will imitate Tucker and waddle over to me to tell me that she likes me. But normally, her behaviour is nondescript.

Even so, I marvel at her sometimes. She has a sensitive stomach. She will throw up her food once in a while, usually very soon after eating it. I feed her hairball remedy, and I know to keep her away from certain fare that exacerbates the condition. And it is rarer now that she regurgitates than it was.

I mention this distasteful topic because my Chubs does something remarkable when she is about to upchuck. She does her best to reach hardwood or linoleum flooring. I thought at first this was mere coincidence. But for some time, whenever she is making that rather horrible noise indicative of nutritional reappearance, whenever her body convulses like John Hurt in the most memorable scene from Alien, Josie hurries, as much as she can, to a patch of smooth and uncovered floor. Most recently, she was on the bed, where she sometimes is served her meals (yes, I give her food there; if that’s where she eats it, that’s where I serve it; let’s move on). I heard her heave and hastened in to the bedroom (running just frightens her) to observe her trundle down the steps in time to throw up on the floor.

She has jumped from the bed in order not to sully the covers, she has trotted from the sitting room rug to the hardwood floor, she has even descended from a cat-tree to unload at ground-level. (This last feat is difficult to achieve in a hurry, and may result in the most spectacular release of post-consumption material, dropped from a height onto several platforms in succession.) She doesn’t always make it, and periodically, she doesn’t try, but perhaps my exasperation, probably displayed too many times when washing sheets and comforter covers, scrubbing rugs and wiping upholstery, made an impression on her. I try not to let my negative emotions show around the beasts, but I’m sure they know my reactions on some level. I have, in fact, taken to complimenting the Great White when she empties her belly on an easily-cleaned surface, rather than on fabric; this probably confuses her more than anything else…

So Josie does her part for the harmony of the household, in her quiet, unassuming way. Now and then, my background cat comes to the foreground. And throws up on it. 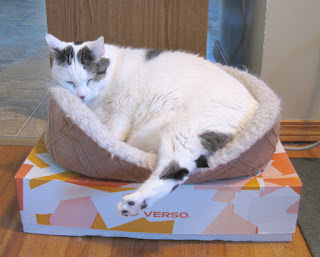