Having Fun Together, Separately

The toy called Undercover Mouse was given to me some years ago by a friend. The cats enjoy it, though I don’t have it out continuously. I want it to be something special that they are permitted to play with once a week or so. As well, there is the fact that some of the cats are not interested in it, or, perhaps, not interested in it while other cats are. 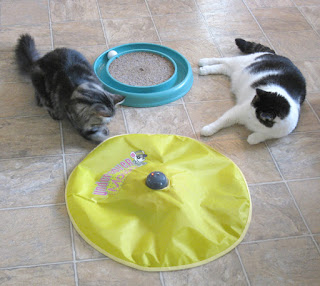 Not unexpectedly, Noah enjoys the toy. It is a mechanical device in which a wand revolves under a circular shroud. The wand will stop periodically and swing back the way it came. Sometimes it will pause, only to start again. There are several speeds. Though I was not surprised by Noah’s exuberance over the game, I was by Tucker’s participation. 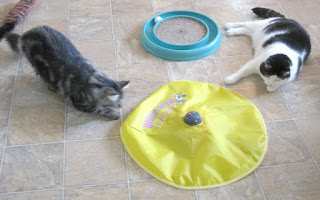 The roly poly one doesn’t care for Noah. Well, I suppose it is more accurate to write that he is annoyed by the boy’s presence and now and then tries to beat him up. I think that has more to do with hierarchy than with personality. The instances of combat have decreased, and it was nice to see the two of them playing with the same toy at the same time. That’s as close as they will likely get to playing together. 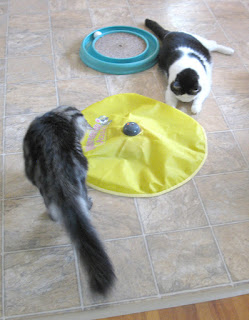 Even so, a good time was had. Renn came by at one point. He rarely played with Undercover Mouse previously, and this time contented himself with observing the fun. The girls were uninterested in playing, though Cammie grumpily made her way through the ruckus, hissing at everyone. I suspect she enjoyed that more than any game. 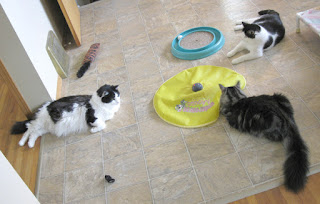 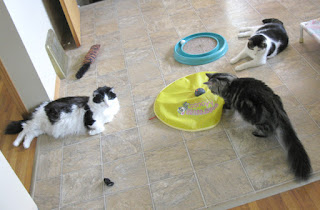 It was an entertaining Saturday afternoon, for the boys, and for me, watching them have their fun. By dinner-time, Tucker was tuckered out but Noah could have gone on for several more hours - the energy of youth. He seemed to derive as much pleasure from lying in the path of the wand - which creates an endless noise resembling a child’s toy machine-gun - as from chasing it. I eventually put the toy away, in time for dinner to be served. And afterward, even Noah was ready for a nap. 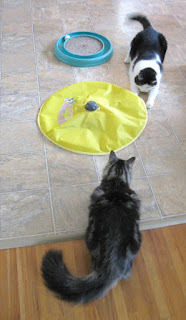